For the story of this event and a gallery of photos, see the post just above: 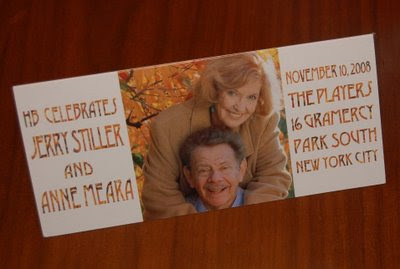 A Gala Benefit to Honor Anne Meara and Jerry Stiller

For the story of this event and a gallery of photos, see the post just above:

I was lucky enough to take the class that Jerry Stiller taught one semester at the HB Studio. And on days he couldn't make it to class, I was also lucky enough to study with Anne Meara, who came in to substitute for him.

It was a very good class. I had a wonderful time working on scenes with Isabelle Fokine (grandaughter of the great choreographer), perhaps the most charismatic scene partner I've ever had; and there were many other fine students in the class.

Stiller used free-form improvs and scene study, and remembrances of his own days as a student. When one student took off his shirt for a gritty scene, he talked about Uta Hagen's objections to Steve McQueen who, Stiller suggested, seemed to almost always act with his shirt off. Anne Meara was gently focussed on getting to the emotional heart of a relationship, often using targetted improvisation to zero in on the truth of a scene.

I was most impressed because, more so than perhaps any other teachers I've had at HB (and I've studied there off and on for decades with many teachers -- it's a great place!), they were people with a generous and deeply human warmth.

Here's more information about the benefit, and the recipients of the honors:

The Herbert Berghof (HB) Studio and the HB Playwrights Foundation will host a tribute to the acclaimed and accomplished actor/comedians Anne Meara and Jerry Stiller in a gala celebration at The Players Club on Monday, November 10, 2008. Richard Pergolis of Pergolis Swartz will be the Corporate Chair of the event and television personality Joy Behar will be the MC for the evening. Anne Jackson and Eli Wallach will present the third annual Herbert Berghof - Uta Hagen Achievement Award to Ms. Meara and Mr. Stiller, given in memory of the actor/director Herbert Berghof and his wife and partner, the storied actress and master teacher Uta Hagen. The award recognizes theatre artists of extraordinary talent, achievement, and humanity who, in the conduct of their professional and artistic practice, have demonstrated an exemplary commitment to the vitality, integrity, and mission of the theatre and its community.

The evening will include a cocktail reception, dinner, and a musical presentation featuring jazz musician David Amram and an excerpt from HB Ensemble member Danusia Trevino's one woman show "Wonder Bread." The tribute will also feature remarks by 2007 Honoree Fritz Weaver, John Guare, Kevin James, Doris Roberts, Amy and Ben Stiller and Joseph Benincasa, Executive Director of The Actors' Fund. Ticket prices range from $300 for an individual ticket to $5,000 for a table for 10 and a full-page tribute in the souvenir program for the event.

For information and reservations, please email to gala2008@hbstudio.org, or contact Peter Bloch, Managing Director, at 212.675.2370 x6.


Anne Meara has been nominated for five Emmy Awards. Her recent credits include appearances on Sex in the City and King of Queens. Her writing credits include After-Play produced Off-Broadway at Theatre Four and The Manhattan Theatre Club, for which she won the John Gassner Award. Another play, Down The Garden Paths, was done Off-Broadway and regionally starring Anne Jackson and Eli Wallach. Anne also created the role of Bunny in John Guare's House of Blue Leaves, received a Tony Award nomination for Anna Christie at The Roundabout Theatre, appeared in the feature film Like Mike, and in Night at the Museum with her son, Ben Stiller. She was also co-writer and star of The Other Woman, a CBS movie of the Week, which won a Writer's Guild Award.

Jerry Stiller was nominated for an Emmy Award and won the American Comedy Award for his portrayal of Frank Costanza on Seinfeld. He just finished nine years as Arthur Spooner on King of Queens. In film, Jerry was most recently seen as Mr. Pinky in the movie Hairspray and Doc in the Farrelly Brothers movie Heartbreak Kid, where he starred opposite his son, Ben Stiller. Broadway has seen Jerry in Hurlyburly, The Ritz and Three Men on a Horse, while other film appearances include The Taking of Pelham One-Two-Three, Airport '75, the original version of Hairspray, Zoolander (also with his son, Ben) and the starring role in The Independent. He has also lent his voice to animated films including Teacher's Pet, Lion King 3, Lion King 1½ and the CBS holiday special, Robbie the Reindeer.

As Stiller and Meara, Anne and Jerry played record-breaking engagements at Max Gordon's Blue Angel and The Village Vanguard and were seen on the Ed Sullivan Show 36 times and received many awards for their radio and TV commercials that include Amalgamated Bank, Blue Nun wines and United Van Lines. They have been honored with a Star on the Hollywood Walk of Fame; with the Productive Aging Award, presented by the Jewish Council For the Aging in Washington, D.C.; and with the Thalia Award from Humber College in Toronto.