POETRY
STORIES, PERFORMANCES & REVIEWS from
QPORIT
Today is the official World Poetry Day.  Here are some poetry posts from QPORIT.

Review: MUCH ADO ABOUT NOTHING
https://qporit.blogspot.com/2013/02/much-ado-about-nothing-at-tfana.html

Review: THE TAMING OF THE SHREW
https://qporit.blogspot.com/2011/11/blackfriars-conference.html

Report: CLASSNOTES: AN EVENING OF CHAMBER MUSIC AND POETRY
http://qporit.blogspot.com/2008/12/classnotes-concert-fri-dec-12.html


Check out today's Google Doodle. You can compose a melody/line of music, and Johann Sebastian Bach, himself (aided by AI), will harmonize it for you. There's also a story about it on the same page. It's fun!


On the same topic, more or less, here's a book that shows you how you can program a bot to play Go, and learn about Deep Learning at the same time:

DEEP LEARNING AND THE GAME OF GO
https://livebook.manning.com/#!/book/deep-learning-and-the-game-of-go/about-this-book/


A more elementary do-it-yourself book about AI that shows exactly how you can teach a computer to tell a cat from a dog is:

MAKE YOUR OWN NEURAL NETWORK
by Tariq Rashad

BE MORE CHILL
BE MORE CHILL is a first rate Broadway show. It opens with great energy. Even before the first note of the overture, the instruments lurking in the back of the stage promise something new that's old. Yes, the overture opens with the sounds of a theramin, the classic 90 years old, futuristic, electronic music instrument, played live, together with an additional array of carefully chosen instruments.

BMC opens with great energy, a cast that is diverse, and music that is deceptively sophisticated. And it maintains that energy throughout, even building as it reaches the set-pieces of the climax.

Like anything really well done, it seems simple, like any kid could do it. But look closely and it's skillfully directed, choreographed, written (book, lyrics and music) and expertly acted and sung. Every element has been carefully tweaked. It's satirical and genuine, sci-fi-ish and retro, serious and nonsensically escapist.

The play is about high school kids in New Jersey.

It is very funny. It's not just for kids: I was among the oldest in the audience and I laughed more than I do for most overt "comedies". It even has some sly throw-away comments on current issues in social media networking that go beyond the basic story. The songs (music and lyrics) are simultaneously happy and sad, banal in subject matter and profound in emotion. The lyrics are unusually important in telling the story and, happily (and somewhat unusually), both the lyrics and the unsung words were so completely well articulated that everything was clear.

The composer and lyricist, Joe Iconis, is well known in indie theater circles.  He will be doing a cabaret show at FEINSTEIN'S / 54 BELOW in April and May. This is his first Broadway show. GL Joe! 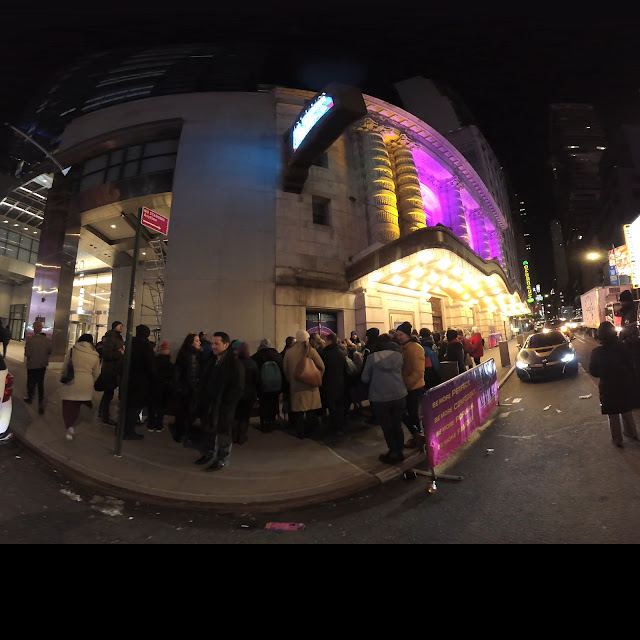 After a preview...
a crowd waiting for the cast at the stage door
Photo by Eric Roffman, QPORIT


LINKS
BE MORE CHILL
http://bemorechillmusical.com/
(FYI - This site is not broken. It's doing that on purpose!)

I do not know what ogres-crypt is. Or who runs it. Or whether it is safe. Or whether if it is safe now, it will stay safe. So to be safe, use it with your eyes wide open and your defender on.
But several sites I more or less trust have pointed out that this site has a valuable list of genres, subgenres, languages, directors, actors and more that can be used to fine tune -- or broaden -- your search for things to watch on NETFLIX. And it is easy to use.
However, note that these categories are so specific, many have just one, or even no films attached to them. For example,
Has only one film, "Anesthesia".

Here's the link:
A LIST OF LOTS OF CATEGORIES ON NETFLIX
http://ogres-crypt.com/public/NetFlix-Streaming-Genres.html

"ZUCKED" by Roger McNamee
and
EXTENDED REALITY (XR)
AMAZON & NYC
Seconds after Amazon posted its notice cancelling plans to build a new HQ in NYC, news appeared in a text flash on CNBC, and a few seconds later there were tweets on twitter.
In 1951, a major event happening at around lunch time, would be in an afternoon newspaper probably by 5:00.  (Historical note: There were morning, afternoon, and evening newspapers in 1951.)
There were no smart phones in 1951. President Kennedy would not become President for more than 10 years, to announce the space program, leading to satellite communications, and GPS. TV’s were rare, large, heavy, and bulky, but with small, low resolution, black and white screens. Transistors were still in the laboratory – radios used vacuum tubes. That was less than 70 years ago.
Since the commercial introduction of transistors, the power of computation has doubled every 2 to 3 years (“Moore’s law”).  That’s exponentially. When something doubles every few years it means that every few years, in each new cycle, we can do, again, as much as we ever did in all the previous years put together.
eXtended Reality is the combination of VR, AR, MR, AI, IoT, 5G computing, and all the other content and technology made possible, now, by this exponential growth in computing power.
A computing system’s main subsystems include: the inputs (for example, IoT sensors); the computations and applications (for example, AI), the communications within and amongst all its parts (for example 5G), and the outputs (for example, VR, MR, and AR). And when these systems work together new hybrid applications are possible (for example, Social Media; and Robots, including autonomous vehicles).
Unfortunately, while computing power is increasing exponentially, social and human evolution is not.
A decade from now the current versions of Facebook, Apple, Google, Smart Phones, automobiles, health care, and jobs, will have been totally obliterated, made obsolescent by new technologies.  But people and social institutions may not keep up with the changes in technology.
The opposition to Amazon’s headquarters in NYC came from people who are concerned about the disconnect between the business opportunities made by and for Amazon, Amazon's business practices, and the lack of concern for the real-life, current and future prospects for the people and neighborhood where the HQ was to rise, including the needed infrastructure improvements.
NYC needs the Amazon HQ, but NY was not properly prepared, and did not properly prepare for Amazon’s arrival.
The support for Trump in “rust” states came from the disconnect between the business opportunities for those in tune with exponential technology power (mostly on the coasts), and those whose professional and social progress was not only not exponentially growing, but facing headwinds from technology.
One cannot… Not even a president, not even a king, not even a mythical figure (King Canute), can stop the tide. Neither can the exponential growth in the power of technology be stopped. We will have as much change in the next few years as all the change we've had since 1951!
Since change started in the 1950’s with the use of the transistor, change has become about 220 times faster, that’s about a million times faster, and in a few years it will be 2 million times faster, every few years making possible as much new change as has ever happened before.
Our job is to help social evolution evolve to adapt to the exponential growth in opportunity, allowing its benefits, and preventing its potential harm.
Roger McNamee saw the potential benefits from social connections engineered by Mark Zuckerberg and Facebook. He now sees the potential harm and has written about it powerfully in “ZUCKED.”
He sees the danger in the ability of Facebook to get users to contribute personal, private information about themselves. One danger is the ability of others to use that information to improperly influence elections, as Russians and their enablers did in the 2016 election.
He sees the danger in the inability of Facebook to prevent false, malicious, dangerous, and even murderous communications being efficiently sent from bad actors to huge numbers of Facebook users.
ZUCKED is a clear, penetrating look at some of the current and potential dangers of Facebook and other social media companies, and a stab at some ways to prevent, or mitigate, or correct the problems.
Moreover, McNamee is working to create a conversation on these issues, and is working directly to effect positive change.  The final appendix in the book includes an excellent bibliographic reference for additional self-education on the power and harm of social media.
Privacy, Security and Convenience are at war with each other. A’s desire for security is at war with A’s desire for convenience. Also, A’s desire to keep its privacy, is at war with B’s desire for A to be transparent. And vice versa: Think Apple (wants security) vs the government on encryption (wants Apple’s transparency); and the government on classified documents (wants secrecy) vs newspapers (want the government to be transparent).
It’s not a simple question of value: Consumers value the convenience of using Social Media for connections much more than they value the security of their personal information (until they are affected directly).  Consumers value clear automated information much more than ad-hoc human advice (despite GPS directions that may send them to a dead end, a dangerous crossing, or the middle of a lake).
The problems that McNamee is calling our urgent attention to, will be both ameliorated by the fact that exponential growth of the elements of eXtended Reality will make obsolete the current versions of Facebook and other companies, and exacerbated by the exponential growth of new opportunities for help and harm.
Our job is to understand the mismatch in the rate of change between technology and people, and devote substantial effort to understanding and then implementing how to manage progress so it is a positive force.
In ZUCKED, McNamee has done a vital service in furthering this understanding, and beginning to plan the implementation of policies for management of the future.
MEETS


Roger McNamee will be speaking about ZUCKED at the Greene Space, on Monday March 4.
http://www.thegreenespace.org/events/thegreenespace/2019/mar/04/team-human-live-roger-mcnamee-and-ron-kim/