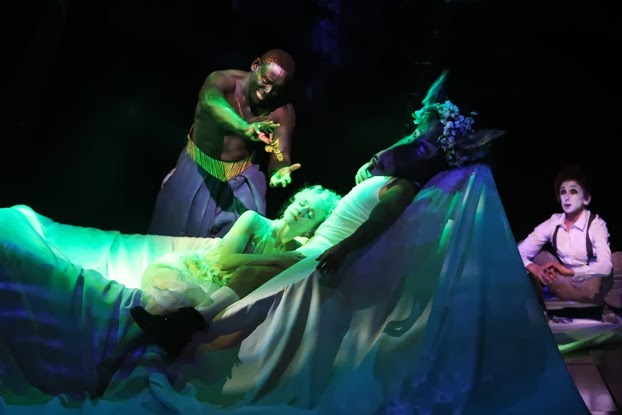 Shakespeare’s words are wonderful, but what provides exceptional grandeur to his A MIDSUMMER NIGHT'S DREAM (MSND) is the opportunity to create magic on stage. Julie Taymor, in the new production inaugurating Theatre For A New Audience's new home, creates a wondrous, visually spectacular production.

Perhaps the most amazing things in the production are the brilliant troupe of young performers; and the fabrics with exquisite projections that provide most of the stage design.

The children (as fairies / “Rude Elementals”, animals, tree trunks, and even children) are infectiously enthusiastic, and skillful in their execution of brilliant routines with dancing, prancing, and even constructing the most evocative forest I’ve ever seen on stage. They are a physical troupe integral to the theatrical performance, not simply an embellishment.

Fabric is used for many stunning moments throughout the performance from lifting characters into the sky, to being the medium which holds beautiful projections of images that set the stage or enhance the story. Aside from the creative brilliance, the technical achievement of getting these moving fabrics to hold high quality, beautiful images is astonishing.

The production is inventive and also a reprise and re-invention of some of Julie Taymor’s signature theatrical devices, including the use of three dimensional space (height/air), variations on puppetry, visual projections, and the use of fabrics to organize the stage design. 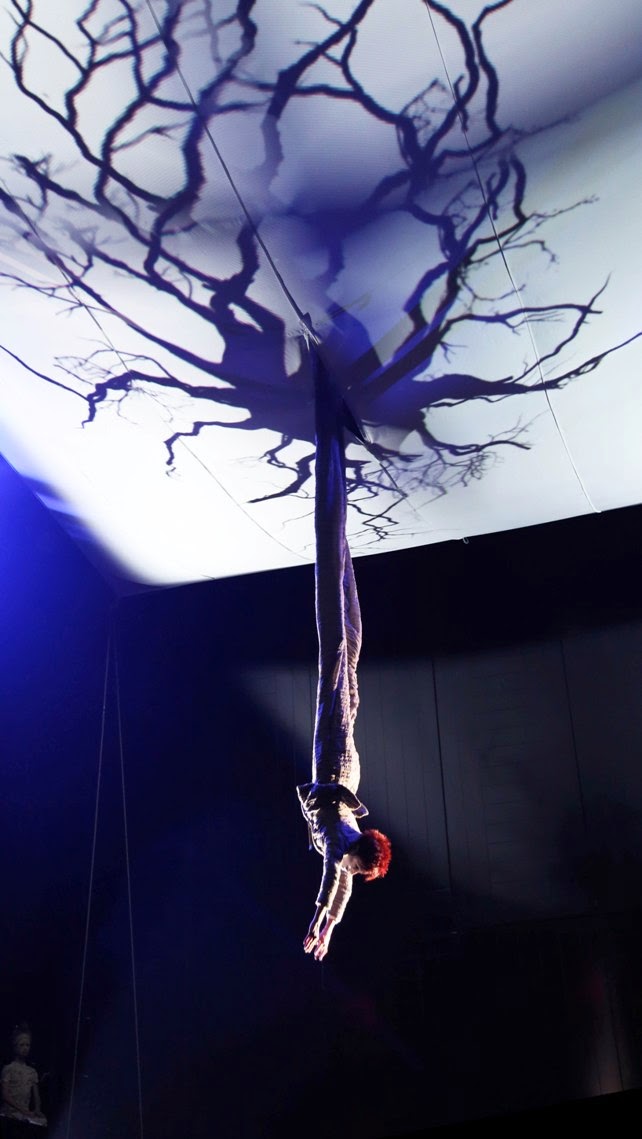 
The acting is excellent, too! 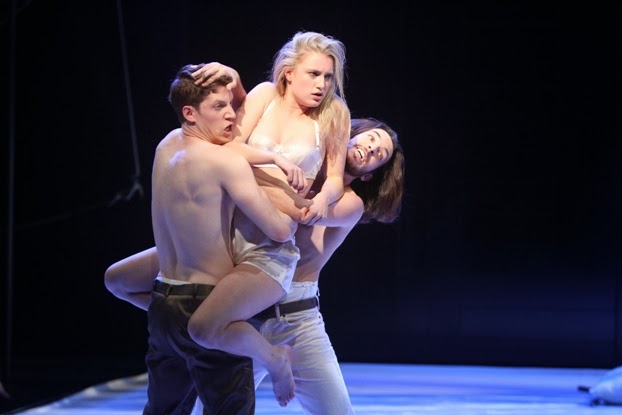 
Still, while this production is superb, I do have some minor quibbles and one serious alert.

And one serious note:


Julie Taymor has done a brilliant job combining a stunningly visual production with a vocally clear and commanding presentation. It's a glorious production of A MIDSUMMER NIGHT'S DREAM that will be remembered as a classic and should not be missed! 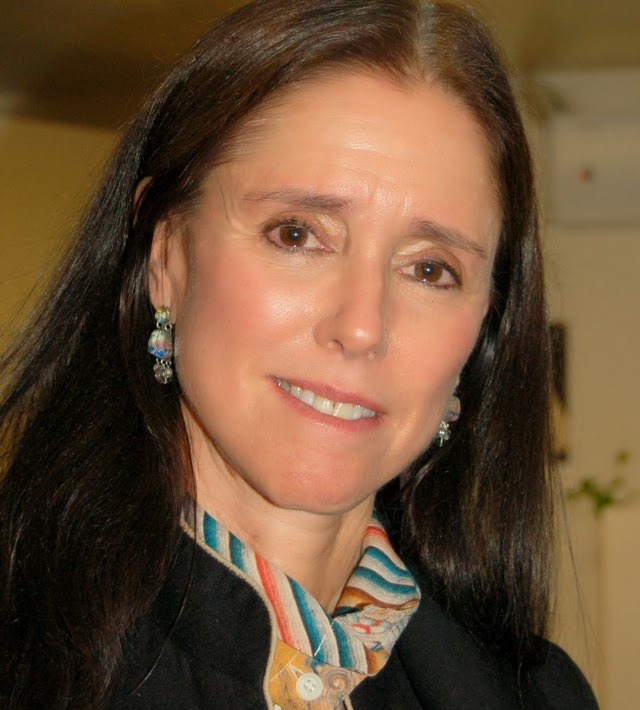 
Jeffrey Horowitz is the Founding Artistic Director of the Theatre For A New Audience (TFANA), which began more than thirty years ago, in 1979. Up until now they have performed in a variety of theaters, but not their own. 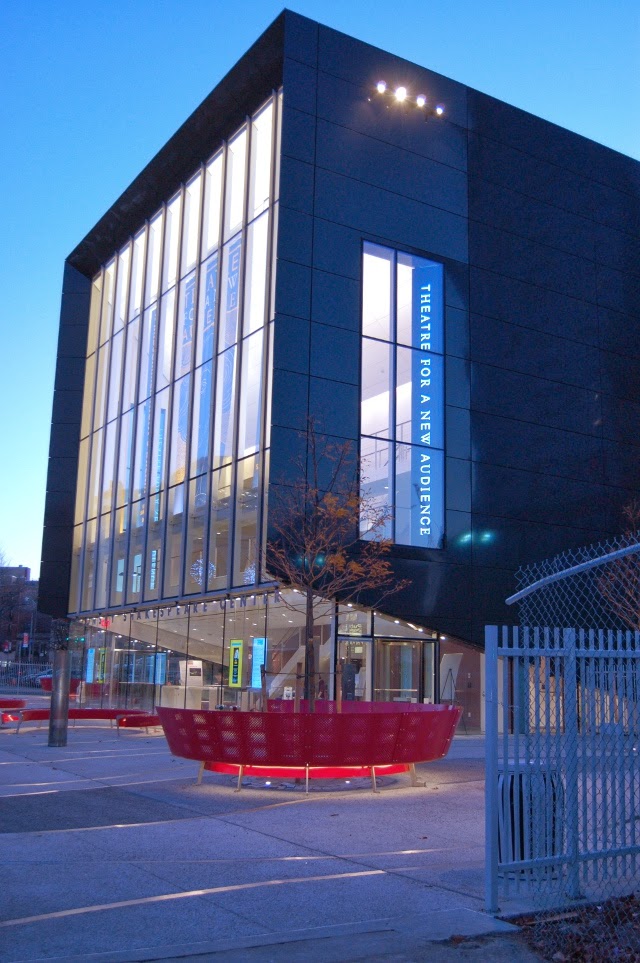 
The Polonsky Shakespeare Center, the new, permanent home for TFANA, represents many years of development, planning and fundraising. It contains two theaters: the beautiful, highly re-configurable Scripps Mainstage, with 299 seats, and the Rogers Studio with 50 seats. It has attractive, comfortable meeting areas outdoors in an “arts plaza” and on the ground floor. There are plans to have a transmedia-capable electronic message board outside, and to have a café, and a book kiosk.

In addition to its own major, mainstage theatrical performances, TFANA has ambitious plans for training and other programs.

MSND, running through January 12, 2014 is the first play in an exciting inaugural season. It will be followed by KING LEAR, directed by Arin Arbus, starring Michael Pennington, running from March 14 to May 4. Then, Ionesco’s THE KILLER, translated by Michael Feingold, directed by Darko Tesnjak, and featuring Michael Shannon will run from May 17 to June 29, 2014.

With a great start to an important addition to New York Theater, TFANA’s new theater is about a block away from the Brooklyn Academy of Music (BAM). Synergy between the venues is likely to enhance and enrich the Brooklyn neighborhood.

This is a family-friendly show, a great introduction to Shakespeare for children. (Note that it would be helpful, both for children and adults to prepare before the show by knowing the story and even reading, watching a video, or listening to the play. Shakespeare only gets better, the better you know the play.)

This is likely to be remembered as an historic production. Don’t miss it. In fact, with limited seating, limited runs, and terrific shows, grabbing season tickets for the entire inaugural season might be wise.

This entertaining, profound, beautiful, and often amazing production of A Midsummer Nights Dream inaugurates a terrific new home for Theatre For A New Audience.


THEATER AND TICKET INFORMATION
(See below for links and references)

Flex Passes are also available for $208 and include four tickets
to be used in any combination over the inaugural season.

For more information or to subscribe online, please visit
www.tfana.org


EVENING PERFORMANCES
Tuesday through Sunday evenings at 7:30pm and
Monday, December 23 at 7:30pm.


THE SHAKESPEARE SOCIETY
will be holding a discussion about this production
at the theater on Monday, November 18:

SPIRITS OF ANOTHER SORT
Nature, Art and Imagination in
A Midsummer Night's Dream

November 18 at 7pm
At: Theatre for a New Audience
at the Polonsky Shakespeare Center

To celebrate the opening of Theatre for a New Audience's new home and its inaugural production of A Midsummer Night's Dream, directed by Julie Taymor with music by Elliot Goldenthal, cast members David Harewood, Tina Benko and Max Casella will join celebrated Oxford professor Jonathan Bate for a lively evening of commentary, performance and conversation. Professor Bate, the award-winning author of The Soul of the Age and The Genius of Shakespeare, will lead a discussion of the nature of fairies in the Elizabethan world and in the play, and will explore how the "airy nothings" of magic, dreams, and imagination effect "translations" that grow to ultimate "constancy" in love and art.

A MIDSUMMER NIGHT’S DREAM ON AMAZON