He is an ancient mariner, with a long grey beard, a glittering eye and a skinny hand, who tells a story of tragedy and horror and prayer and redemption at sea.

The story was related in Samuel Coleridge’s poem THE RIME OF THE ANCIENT MARINER.

In ALBATROSS, the Mariner himself tells the story more fully (including the backstory – how he came to sail on the ship), and notes that although he told Coleridge the story himself, in the poem the rendition is too pretty. The Mariner’s story is raw, with many details, he says, that were left out of Coleridge’s poem.

ALBATROSS was written by Matthew Spangler and Benjamin Evett, and directed by Rick Lombardo. Benjamin Evett portrays the Mariner in a fine solo performance at the 59E59 theater. 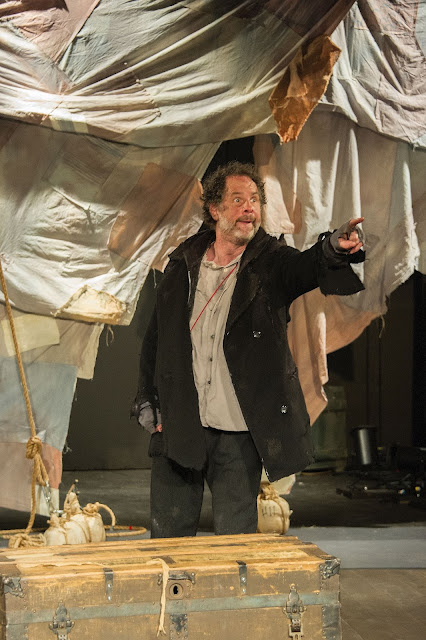 This is a rich rendition of a powerful story with many disparate elements.  The performance is mesmerizing and Evett’s Mariner – like the Mariner in the poem – grabs the audience and holds them through the hour and a half (no intermission) the story unfolds.  Many things happen; the performance tells the story clearly and actively, assisted by sea-faring props, scenery and costuming. Evett arrives on stage in character, and tells the story entirely in character.

The play, produced and created at the “Poets Theater” in Boston, acts not only as a powerful theatrical experience, but also as a critical commentary on Coleridge’s poetry. Many famous lines from the poem are quoted, some details are slightly altered, and much more, consistent with the story, is added.

The poem may be taken as an allegory of sin, punishment, prayer, and redemption. The notion that the poem has deeper meanings than just its plot is reinforced by the title: “Rime” is a pun on “Rhyme”;  its actual dictionary meaning is

Ice features critically within the story:

And now there came both mist and snow,
And it grew wondrous cold:
And ice, mast-high, came floating by,
As green as emerald.
And through the drifts the snowy clifts
Did send a dismal sheen:
Nor shapes of men nor beasts we ken--
The ice was all between.

Literally, the poem's title means "The icy crust of the ancient mariner."

ALBATROSS is a rich theatrical experience, with a terrific performance, some humor, an opportunity to experience life on a marauding ship several hundred years ago, and a chance to gain insights into a poetic classic.

The 59E59 theater is a comfortable, busy place, hosting several plays in multiple theater spaces, and featuring a well-stocked bar which is open before and after shows and can be accessed even without a theater ticket.

THE RIME OF THE ANCIENT MARINER (Full text, formatted for easier reading)
http://qporit.blogspot.com/2017/01/the-rime-of-ancient-mariner.html

Comments:
I’m coming in rather late here but there’s something I’ve been wondering about this topic and You nicely cover this, Thanks for sharing such this nice article. Your post was really good. Some ideas can be made. About English literature. Further, you can access this site to read Rime of the Ancient Mariner is a Poem of Crime and Punishment