SLEEP NO MORE
AT THE McKITTRICK HOTEL
CREATED BY PUNCHDRUNK 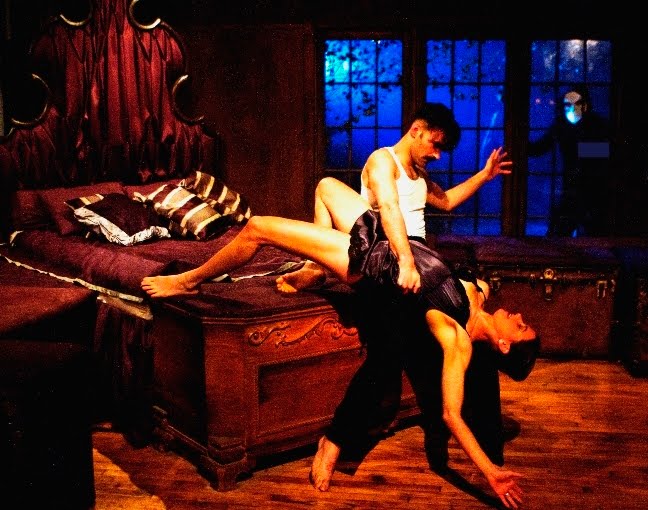 SLEEP NO MORE is a hypnotic, atmospheric, brilliant, amazing, immersive, interactive, theater/dance/movement/art-installation/mystery/adventure. It has been said to induce insomnia.
Based loosely on that Scottish play (the title comes from Act 2 Scene 2) plus a dash of Hitchcock, it takes place in a long abandoned, but newly, intricately restored hotel in Chelsea.  You, entering this building through a dark corridor, divest yourself of coats and packages, take a playing card which is your entrance key, don a mask -- Eyes-Wide-Shut-like -- embark on an elevator from which you are dropped off on one of six or so dark floors nearly every inch of which contains something strange and interesting, left to examine the space on your own, find the cast of players (recognizable because they are maskless/barefaced), and experience whatever may happen.
What happens is breathtaking set-pieces of movement, fascinating spaces, mostly ominous music, a story that is hard (nay, impossible) to follow on a single visit, and surprises.
The movement/dance in the set-pieces, suggestive of singular moments from the sources, but almost wordless, are fantastic.
See it if you can.  See it again if you can.
SLEEP NO MORE, created by Punchdrunk. 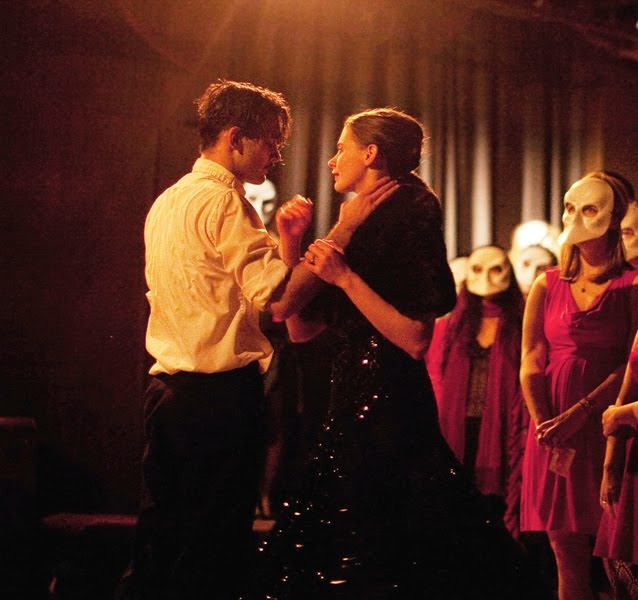 SLEEP NO MORE
Nicholas Bruder and Sophie Bertolussi with audience members
(c) Photo by Robin Roemer
There are two schools of thought about how to enjoy SLEEP NO MORE (SNM) (or any show) on a first visit. The first is to know as little as possible about the show and just discover the experience. The second is to come prepared.
For myself, I fall into the first school of thought, because I want to know what the experience is like for a complete newbie; and if I want or need to, I’ll go again (and I do want to go to SLEEP NO MORE again).
However, for most other people I would suggest knowing a little about the experience before you go, especially for Sleep No More. You will have more fun, be less confused and frustrated, see more and experience more, and better understand the evening.
So, in my opinion, PART II contains enhancers, not spoilers; but virgin-experience purists may want to skip the rest of this article until after they have spent their first evening at the McKittrick.
The information in the next sections consists of my advice to you -- based on my first visit to the show, plus what I gleaned from the references listed in PART IV. (Part III, below, is about the production team.)

PART IIc
The SPACE and The CHARACTERS:
Here is a rough guide to the space:
Feel free to explore, but if you are by yourself, then there probably is something more interesting happening somewhere else. There are a lot of people at the show, so they must have found something to draw them away. It is generally better to follow actors (as a way to find the action), than to pick a spot and wait for some action to come to you.
According to “a girl named Zelda” in a comment on the “unfinishing blog” (see below in PART IV for reference link #2 – and also links #17 And #18) here’s what’s on all the floors:
5 - Hospital Ward, including doctor's offices, a padded room, a room full of beds, a room full of bathtubs (yes these get used), and a surgery observation room. The forest, which includes the witch's hut, is also on this floor. (I think there are public bathrooms on this floor.)
4 - Street of shops, the speakeasy/pool hall, Hecate's duplicate of the Manderley bar (location of the witch's rave).
3 - Macbeth's bedroom, Macduff's suite, crumbled courtyard, cemetery.
2 - Hotel lobby, Manderley Bar (covered in sheets), bank of phone booths.
1 - Duncan's quarters, several small chapels, balcony overlooking the forest/ballroom
Lower Level - forest/ballroom/balcony

The CHARACTERS (Based on the program, but I’m guessing a bit here)
“THE COURT”
Duncan
Malcolm
Macbeth
Lady Macbeth
Macduff
Lady Macduff
Banquo
“THE SUPERNATURAL”
Hecate (Probably in a red dress)
Witches (One may be male and in some scenes nude)
Speakeasy Bartender
Agnes Naismith (aka The Second Mrs. De Winter?)
“THE SANITORIUM”
Matron of the sanitorium
Nurses (Probably looking like nurses – one may be male?)
‘TOWNSPEOPLE”
J Fulton - Tailor
Mr. Bargarran – Taxidermist
“HOTEL”
Catherine Campbell – Housekeeper (aka Mrs. Danvers?)
The Porter
The Bellhop
The 2nd Mrs. de Winter (the woman with a suitcase?) and Mrs. Danvers (probably in a black dress?) are characters from Rebecca.
PART III
THE CREATIVE AND PRODUCING TEAMS
AND ACTIVE THEATER
Punchdrunk is a British theatrical group founded by Felix Barrett, the company’s artistic director. Maxine Doyle is co-director and choreographer. For about 12 years Punchdrunk has been developing site-specific and immersive theater (SSIT), in which the performance takes place in an environment designed for the production, and the audience is free to move about, experiencing the action in the space in which it happens.
Punchdrunk seems particularly interested in adaptations of classical theatrical pieces for this format. In 2000 they did a production of Chekhov’s Cherry Orchard. Inspirations for other productions have included: Sophocles Oedipus Rex and Antigone; Shakespeare’s Romeo & Juliet and Stravinsky’s Firebird; Ionesco’s The Chairs; and Peter Weiss’ Marat/Sade.
Punchdrunk, at least in Sleep No More, separates the audience from the cast with masks, and most of the action is abstract dance with minimal dialog, if any.
While Punchdrunk may have developed the most sophisticated examples of SSIT theater, this kind of experience does have a history, including Tamara, a Canadian play that had a long series of runs in several cities from 1981 to 2002. (I saw a NY production.)
Slightly different (more participatory & interactive and less site-specific), Playing With Reality is currently doing Interactive Theater in which a member of the audience joins the cast as the central character of a completely improvised story. Members of Playing With Reality call themselves InterActors.
The sketch comedy group TMLMTBGB, downtown, brings audience members into some of their sketches. And at THE PIT, Open Improv’s are a kind of more intense participatory theater.
Diane Paulus and Randy Weiner created The Donkey Show, which is a cabaret experience inspired by Shakespeare’s Midsummer Night’s Dream.
As interactive computer programming and interactive computer games developed, along with performance art, art installations, and such real-life reality events as the kidnapping of Patricia Hearst, in which she became a central cast member in a real life real street-theater event that was not of her own devising, the idea of interactive, immersive experiences within art installations as theater began to evolve.
Perhaps a good term for immersive, interactive, site-specific live theater, with the audience participating more or less actively, would be Participatory Theater or Active Theater.
Sleep No More was developed in the UK and brought over to the US for a staging in Brookline, MA (outside of Boston) by the American Repertory Theater (A. R. T.), the spectacular theatrical company in Cambridge Mass, currently headed by the brilliant Diane Paulus.
After the run at A. R. T., Sleep No More was brought to New York by the producing company EMURSIVE, which is especially interested in immersive, provocative theater.
One of the principals in EMURSIVE is Randy Weiner, who is the husband of Diane Paulus, and is the co-writer of The Donkey Show.
Weiner is especially interested in immersive, provocative theater, and he is a Managing Partner of The Box in New York and London. The Box is a singularly sexual and expensive late-night nightclub. In New York, according to reports, it was the subject of some complaints (settled according to reports). In London, it was said to be a favorite of a Royal Prince, and in both cities it may have both investments and patronage from noted international movie stars. (Some reports on The Box are listed below. See links #32 - #36.)

AND MORE ACTIVE THEATER STILL TO COME …
I, myself, have been interested in -- and began working on -- interactive projects as soon as personal computers became available, and I am currently developing a production in which audience members are integral participants in a site specific, interactive, immersive theatrical experience inspired by a politically and sexually intense classical play.
A recent article in the New York Times described an experiment in which Tod Machover, a member of the MIT Media Lab and a collaborator with Diane Paulus on an opera was testing the possibility of enhancing Sleep No More with computer technology built into the masks. (Making it into a live and immersive computer game???) (See links #11, #26 and #31)
Sergey Brin of Google was recently seen in San Francisco with Google Goggles – enhanced reality eye-wear that could ultimately make the entire world the theater in which you are immersed.

The number (and passion) of links and on-line comments related to Sleep No More suggests that Active Theater may be striking an important and special chord with its audence!
PART IV
LINKS AND REFERENCES
#1- SLEEP NO MORE – OFFICIAL SITE
http://sleepnomorenyc.com/
NEWS ARTICLES, EXPERIENCES & REVIEWS
#2- COMMENTS -- BASIC INFO
http://aworkunfinishing.blogspot.com/2011/07/spoiler-free-user-friendly-guide-to.html
#3- SLEEP NO MORE AT A.R.T. IN BOSTON
http://www.americanrepertorytheater.org/events/show/sleep-no-more
#4- MOVING INTO CHELSEA
http://www.dnainfo.com/new-york/20101110/chelsea-hells-kitchen/punchdrunk-immersive-theater-group-seeks-replace-mega-clubs-west-chelsea