THE TAMING OF THE SHREW

Maggie Siff is a shrew.  In all too many productions of THE TAMING OF THE SHREW, the "shrew" is not a shrew, but just a bit cross with her language, and the play makes no sense: there is no shrew to tame. In this production, Maggie bursts onto the stage in an obnoxious roar.  Katharina is a shrew. It justifies, explains, and humanizes the whole play.
Andy Grotelueschen appears on stage announcing he's there to find a woman. When he hears that Katharina is available, has a rich dad and a fine dowry, he's pleased; and when he hears she's feisty and more, and worse, (and more worser! still), he's delighted. It's a challenge, a game he's happy to play. And he spells out his method, so there's no question he's about to play a game he's going to enjoy... and is playing to win. 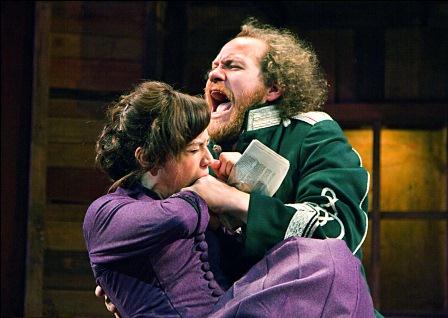 This production of Shakespeare's The Taming of The Shrew, with Maggie Siff as Katharina and Andy Grotelueschen as Petruchio, directed by Arin Arbus at Theater For A New Audience (TFANA) is enjoyable, understandable, entertaining and generally excellent.
Theatre for a New Audience Presents
The Taming of the Shrew
By William Shakespeare

The Duke on 42nd Street 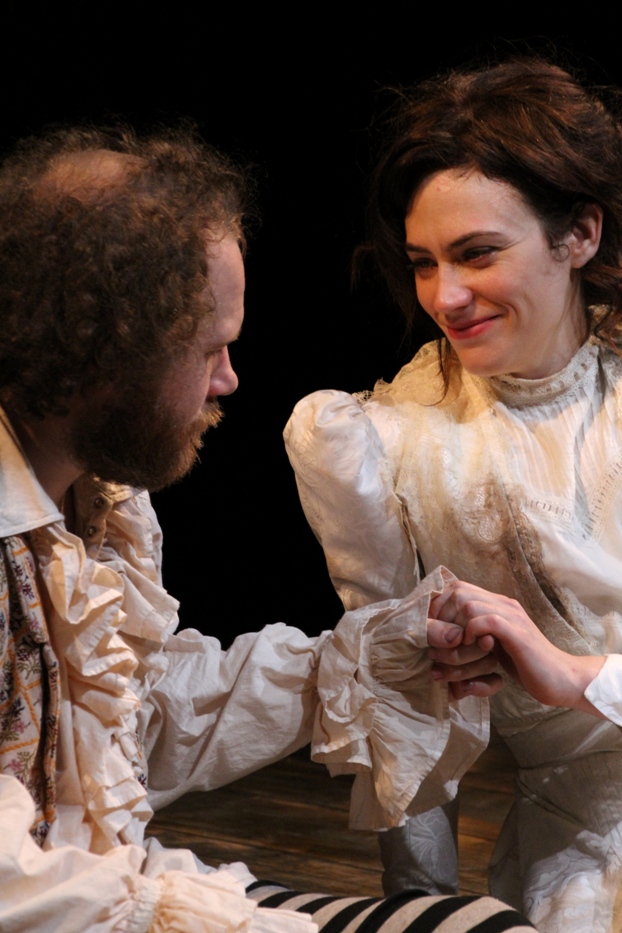 The Taming of The Shrew (TTOTS) is one of Shakespeare's early plays, based on several sources from which different plot elements of the play are taken (including a whole tradition of plays about "taming" women). It was published long after it was written, and there is only one version of the play.  (This, of course, leaves open the possibility that the play we have is not exactly what Shakespeare wrote -- that it might contain parts he did not write, and that parts he did write might be missing.)
Another play, published anonymously (close to the time when TTOTS) was first written, called THE TAMING OF A SHREW (TTOAS), contains both similarities and differences to Shakespeare's play.
Structurally, both plays begin with a section, called the "Induction," in which a passed-out drunk is discovered by a rich man, who decides to play a prank: he dresses the drunk, Sly, as a rich man and instructs his attendants to convince Sly when he awakes that Sly has just awoken from a years-long drunken madness, and that he is really a rich man.  Then the rich man arranges to have a play, namely "The Taming of The Shrew" performed for Sly.  So TTOTS is actually the play within the play, introduced by the "Induction".
The Taming of the Shrew, The Merchant of Venice, and Othello, are all politically incorrect plays. Shrew is about misogyny, Merchant is about a merciless money-lending Jew, and Othello is about a black man drawn to jealous murder of his innocent white wife.
Modern stage directors typically deal with these unPC themes in some combination of three ways:
-- most often, they emphasize the humanity that Shakespeare gives his character ("Hath not a Jew eyes?");

-- least often, they embrace the slur ("And if you wrong us, do we not revenge?" ... "Even now, now, very now, an old black ram / Is tupping your white ewe.");
-- and sometimes, they deny the obvious political incorrectness and try to create an interpretation of the play that enables a politically correct production.
-- less typically, they find a way to finesse the incorrectness of the story.
Arin Arbus uses a combination of all these techniques.  Most obvious, in this production, is denial:  the play in this production is not misogynist: Petruchio does not "tame" Kate, but rather allows her to find herself. Petruchio is playing a game; Katharina is an obnoxious shrew only out of frustration with her inability to communicate with her family and her dislike for any apparently available suitors; and when she warms up to his game and realizes she is in tune with Petruchio (impressed, though skeptical, that he says everything he is doing is for her benefit), Katharina and Petruchio truly fall in love and Katharina can dispense with the bad behavior and become herself.  She is not changed, not tamed, but allowed to self-realize her true nature.
As for the other techniques, the production embraces Katharina's early shrewishness, and the production gives all the characters their full measure of humanity and realistic behavior.
Moreover, this production includes the "Induction," the first scene of the play (often omitted from a staging)  which establishes "The Taming of the Shrew" as a play with a play, finessing its unPC theme by giving it an extra measure of distancing, or plausible deniability as to its intrinsic misogyny.
The production does have some problems: while the lead characters are terrific, and speak clearly and understandably; and most all the acting is excellent, some of the speeches of some of the characters are at times completely incomprehensible.
Also, Bianca, (played nicely by the pretty -- tho' improbably tall for her character -- Kathryn Saffell, in her OB debut), and the Widow (Owen Fouere) rather suddenly and without dramatic justification turn from ostensible models of "good" behavior (in contrast to the shrew) at the beginning, to models of truculence against whom Katharina can then rail at the end.
As mentioned before, in the script of The Taming of The Shrew that has come down to us from some years after Shakespeare's time, there is an "Induction," an opening scene which sets up the play, "The Taming of The Shrew" as a play within a play, performed to a drunk who has been dressed up by a rich prankster.  The "Induction" is the only scene in which the framing characters appear.  In this production, the characters from the framing -- which is placed inexplicably in the Wild West -- sit in the audience throughout the evening to watch the performance of TTOTS , and even have a few words borrowed from another play ("The Taming of A Shrew"), in which there is also a framing device.  But then there is nothing more.  It would have been more satisfying at the end of the play, even if the framing characters had no more words, to -- at least -- give them a bit of business (perhaps a spotlight on the character, Sly, at the end as he applauds the play he's seen, or show him walking away from the scene thoroughly confused, or still drunk and fast asleep), to complete the framing.
A talk-back after the show (there's another after the Saturday April 14 matinee) made some interesting points.  Julie Crawford, from Columbia University stressed the idea that the play as written by Shakespeare embraces simultaneous and conflicting interpretations, while Robert Michels, a Professor of Psychiatry at Cornell was interested in the interpretation of this production which centered -- as described above -- on the way that Katharina and Petruchio find love with each other.
There was also considerable discussion at the talk-back of the framing device of the Induction which, in addition to serving to distance the play from its presumptive misogyny, also casts a spotlight on the fact that in the original productions of this and Shakespeare's other plays, the roles of women were played by boys and men; and that the role one plays in society can seem to change so easily, here just by dressing up in better clothes.

SOME INTERESTING LINKS:
THEATRE FOR A NEW AUDIENCE (TFANA) is one of New York's most important theaters for the consistently excellent production of Shakespearean plays.
www.tfana.org
TFANA has put together a detailed analysis of the play and this production:
http://www.tfana.org/wp-content/uploads/2011/11/The-Taming-of-the-Shrew-360-A-Viewfinder-2012.pdf

THE TAMING OF THE SHREW - WIKIPEDIA
http://en.wikipedia.org/wiki/The_Taming_of_the_Shrew

The Taming of A Shrew (Anonymous), similar in some ways to The Taming of The Shrew (TTOTS), is often taken to be a garbled version of  (a possibly early draft of) TTOTS,  with elements, perhaps, of other plays as well:
http://public.wsu.edu/~delahoyd/shakespeare/taming.html

http://www.brown.edu/Departments/Trinity/actor-andygrotelueschen/
KATHRYN SAFFELL (Bianca)
http://kathrynsaffell.com/
HERE ARE SOME LINKS TO
SCRIPTS AND VIDEOS

TAMING OF THE SHREW
ALL VARIATIONS:

(Note: Please check that you are getting the format and version you want;
the same play comes in many variations!)