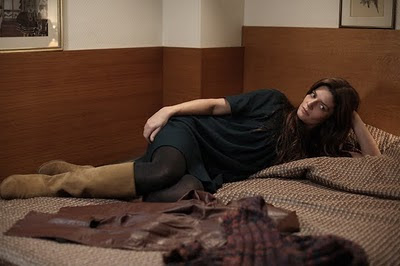 The Film Society of Lincoln Center presents one great series after another. Currently they are about to start a special collection of films selected by Film Comment. And one of my big favorite series has just been announced:

8 Times Up (Huit Fois Debout), Xabi Molia, 2009, 103 min.
When a woman (Julie Gayet) struggling to make ends meet gets evicted, she and her unemployed neighbor set up a makeshift camp in the forest in this seriocomic investigation of the pressures of modern society.

Hideaway (Le refuge), François Ozon, 2009, 88 min.
An incisive character drama about a hardened ex-junkie who is visited by the brother of her late boyfriend while recovering at a beachside retreat.

I'm Happy that My Mother is Alive (Je suis heureux que ma mère soit vivante), Claude Miller, Nathan Miller, 2009, 90 min.
Given up for adoption as a toddler, Thomas becomes obsessed with tracking down his birth mother-but if he finds her, then what? Beautifully acted by a cast of unknowns, and based on a true story.

In the Beginning (A l'origine), Xavier Giannoli, 2009, 120 min.
François Cluzet gives a tour-de-force performance as a small-time conman who convinces an economically depressed town that he has come to resurrect a long-dormant highway construction project.

Making Plans for Lena (Non ma fille tu n'iras pas danser), Christophe Honoré, 2009, 105 min.
Recently liberated from her job and husband, Lena (Chiara Mastroianni) heads home to Brittany for the holidays-only to find her self deluged with nonstop advice as to How To Be Happy.

Rapt, Lucas Belvaux, 2009, 125 min.
A millionaire businessman and playboy (Yvan Attal) is kidnapped and held for ransom in this fact-based, edge-of-your-seat nail-biter. But is his abduction a crime, or a case of just deserts?

Restless (Le bel âge), Laurent Perreau, 2009, 97 min.
Claire, a tomboyish teenager feeling the stirrings of first love, and her grandfather, Maurice, a former Resistance fighter, share a house but soon discover much else as well. A touching, fresh approach to the coming of age tale, with a superb performance by Michel Piccoli.

The Army of Crime (L'armée du crime), Robert Guédiguian, 2009, 139 min.
A taut, revealing thriller about the beginnings of the French Resistance, when the leaders as well as the foot soldiers of the movement were often foreigners-Poles, Jews, Armenians, Spaniards, Italians-and who often had as much to fear from French collaborators as they did the Germans. Starring Virginie Ledoyen.

The Hedgehog (Le hérisson), Mona Achache, 2009, 100 min.
A timely fable about Paloma, a young girl bent on ending it all before she becomes an adult, who learns a thing or two about life from her building's coarse, unkempt concierge (the wonderful Josiane Balasko). Based on Muriel Barbery's well-loved novel.

The King of Escape (Le roi de l'évasion), Alain Guiraudie, 2009, 97 min.
After coming to the rescue of a 16-year-old damsel in distress, a gay, middle-aged tractor salesman decides to give heterosexuality a try in this delightfully offbeat, mid-life crisis comedy.

The Thorn in the Heart (L'épine dans le Coeur), Michel Gondry, 2009, 86 min.
A filmmaker better know for his brilliant rendering of fantasy, Michel Gondry ventures into family history in this quietly affecting portrait of his aunt, school teacher Suzette Gondry, and her eccentric, problematic son, Jean-Yves.

The Wolberg Family (La famille Wolberg), Axelle Ropert, 2009, 80 min.
Meet Simon Wolberg-energetic, enthusiastic, articulate, the mayor of a provincial French town. But does his dedication to his work blind him to everything going on at home?