One of my favorite features of the Hamptons International Film Festival (HIFF) is the series of events centering around the Breakout Performers (BP's). Each year several young and very promising American and foreign actors are honored as Rising Stars (US) and Shooting Stars (EU).
The public events include films with these young actors, panel discussions and parties. (There are also private events for the BP's including "mentoring" with established professionals.)

The last two years and this coming year the honored BP's have been really special. (I'm trying to track down who the earlier -- up thru 2006 -- BP's were.)
Here's a preview of this year's BP's... after we meet the BP's at the festival we'll add more to this story!

Emmy Rossum is 23 (9/12/86)and 5'8". She studied at Columbia University.She is a terrific singer, starting in the Metropolitan Opera Children's Chorus as a child, and starring in Phantom of the Opera. She also had roles in Mystic River and The Day After Tomorrow. Her first starring role was in Nola, a film directed by Alan Hruska (who we interviewed after liking his film, The Warrior Class, one of my favorite films at the Tribeca FF a few years ago). Here's a picture of Alan in his office with a picture of Emmy in Nola on the wall. 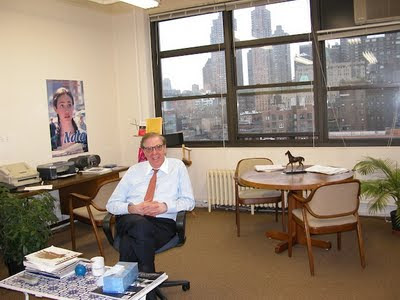 Emmy Rossum in a poster for NOLA
on the wall of director Alan Hruska's office.
Photo by Eric Roffman.
This year she'll be seen at HIFF in Dare (along with Zach Gilford and Rooney Mara).

Emma Stone is 20 (11/6/88) 5' 6". Her first feature was Superbad. She was funny as the host ghostess in Ghosts of Girlfriends Past. She was also in The Rocker, The House Bunny, and Zombieland.

She'll be seen at HIFF in Paper Man with Jeff Bridges. She has Easy-A (from the director of Fired Up) now in post production.

Zach Gilford is 27 (01/14/82). He went to Northwestern. He's a (real life) trip leader for teen adventures... but he's best known for his role as Matt Saracen in Friday Night Lights. (Last year, his teammate Tim Riggins (ie Taylor Kitsch) was a Shooting Star.) Zach is in post production now for The River Why.
http://en.wikipedia.org/wiki/Zach_Gilford
http://www.imdb.com/name/nm1472917/

Rooney Mara (about 24) is part of a famous football owning family, and the sister of Kate Mara who was a Shooting Star last year. She was educated partly at NYU and partly in a traveling program visiting South American countries, and is developing a non-profit organization related to international issues. Rooney is in two movies at HIFF, Dare and Tanner Hall. She has several pictures in post production or getting ready for release.
http://en.wikipedia.org/wiki/Rooney_Mara
http://www.imdb.com/name/nm1913734/
The Shooting Stars are Alba Rohrwacher (Due partite -- Now called, in English, The Ladies Get Their Say) from Italy, and Cyron Melville (Love and Rage), from Denmark.
More about the present and former Breakout Performers after the festival.
NOTES: OCT 10 --
1 - HIFF calls them Breakthrough Performers, not Breakout Performers.
2 - Zach Gilford didn't make it because of Friday Night Lights shooting conflicts. Emma Stone did not arrive in time for the Panel.
3 - Samuli Vauramo, from Finland, one of Europe's Shooting Stars, did arrive, flying in from Rome for a day or two before going right back to Rome to continue shooting a film with George Clooney.