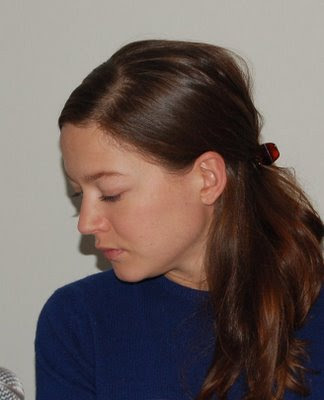 Hannah Herzsprung at HIFF 2008
WOW!
Vier Minuten (Four Minutes) is an intense German film about a pathologically disturbed young woman, a convict with a passionate gift for the piano, and an old woman, the piano teacher at the prison (also seriously disturbed, but in a very different way), who coaches the pianist for a competition.

It is a very powerful film, with superb performances by Hannah Herzsprung as the young pianist, and Monica Bleibtreu as the coach.

The film's power comes from the density of problems and catastrophes suffered and endured by the two women, many of them by their own doing. These are not nice characters.

Although the film does finally make its overloaded plot entirely real and completely clear, the sheer number of problems endured by the characters means that some are predictable and some are surprising; some are introduced with an excess of exposition and some just hit you in the face; some flashbacks are clear and some are initially confusing. Almost anything one might find in a film about a women's prison, and most of the things one finds in films about a music competition are in here.
Written and directed by Chris Kraus, the film has an original pace, structure and style. It's not a great film, because it is overloaded. But because it is overloaded, it is a powerhouse.

The wild, tormented young woman is played with brilliance by Hannah Herzsprung, a young German actress. With exceptional versatility, a year after making this film, Hannah plays an angelic young woman in Werther. Almost totally opposite characters. 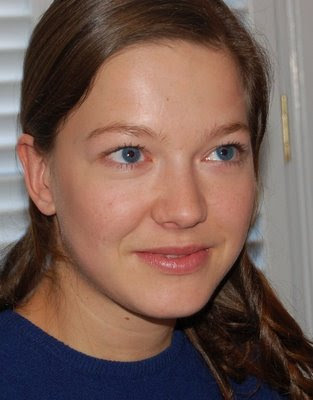 Hannah Herzsprung
with her striking "blaue Augen"
at HIFF 2008

In person, at the Hamptons Film Festival where she had the singular honor -- or double honor -- of being a "Rising Star" in 2007 and then returning as a "Shining Star" in 2008, she is thoughtful, pleasant, intelligent, and mostly charming, but there is that hidden fierceness inside. She speaks perfect English and appears this December in The Reader with Kate Winslet and Ralph Fiennes, from the Weinstein Company.

She is a young member of a new group of European movie stars whose tremendous acting skills and normal English speech will see them moving seamlessly across international borders.