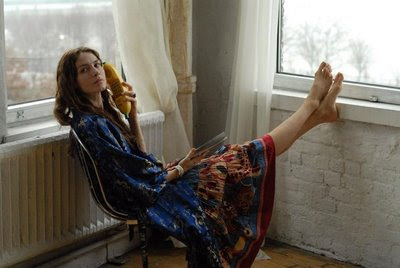 The film stars Saffron Burrows in a commanding performance as a woman who reinvents her life after she discovers in one afternoon that she has lost her job and her boyfriend, and has (very) terminal cancer.

The film has been a selection of the Sundance, Vail, and Hamptons' Film Festivals.

Saffron -- for her powerful and sensitive peformance -- as well as the cinematographer, Bobby Bukowski -- for his inventive and beautiful cinematography -- deserve attention come award season. The script (by Amos Poe -- with some nice zingers) and Amy's sensitive direction are fine as well.

At the Hamptons International Film Festival (HIFF), HIFF 2008, I had the opportunity to interview Amy Redford. Here is a VideoPost from that interview. Following the video, there is a transcript of the QAQ ( that's QPORIT Asked Questions -- pronounced, "quack"), and the basic credits with a link to IMDB.

(Note: If you have a problem running the embedded video, the stand-alone video interview may be found at:

Please see the video interview for Amy's responses to these questions!

1- Saffron Burrows is a striking presence in The Guitar, the first feature film by director Amy Redford.

2- This is Eric from QPORIT with a video report from the Hampton’s film festival where I had a chance to sit down with Amy for a conversation about her film.

3- I asked her how she came to make the film.

4- The film is rather stylized; she’d say metaphorical. Not to be taken absolutely literally. It is front loaded: in the first few minutes of the film, Melody is fired from her job, dumped by her boyfriend, and learns she has terminal cancer with just a month or so to live.

5- There have been several films recently with similar starting points: The Bucket List, and Last Holiday come to mind. I asked Amy what is unique about her film.

6- I mentioned that the film is stylized. It is beautifully and inventively shot by Bobby Bukowski Although most of the action takes place in one large loft, it never feels confined. Bukowski deserves attention at awards time. I asked Amy about the style and the cinematographer.

7- There is one very special shot. Melody is silhouetted… sitting on a wndow sill with her guitar. I asked… Who set up the shot?

8- I recently wrote a theatrical script in which the central character is a woman trying to figure out how to present sex in a play. The Guitar has several scenes with nudity and sex and I was very interested in Amy’s approach as a director to shooting such scenes.

9- Amy is a first time feature film director. She is the daughter of Robert Redford and Lola Van Wagenen. I asked about how she learned the technical aspects of film making, and what role her family played in her life.

10- Many thanks to Amy for this conversation. For more stories about the Hamptons Film Festival, The New York Film Festival, and many other interesting things, please check us out at QPORIT – Quick Previews Of Random Interesting Things -- … For links to more information about The Guitar, visit us at QPORIT and check the post entitled, THE GUITAR & AMY REDFORD posted on Friday, November 7.2008. Visit us at QPORIT often; browse; subscribe! Post a comment! Hope to see and hear from you there (here!), soon!