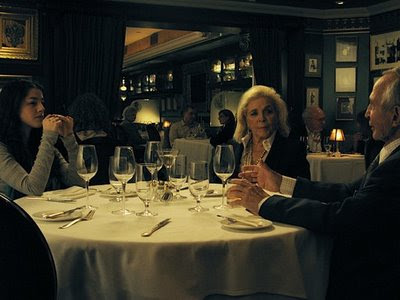 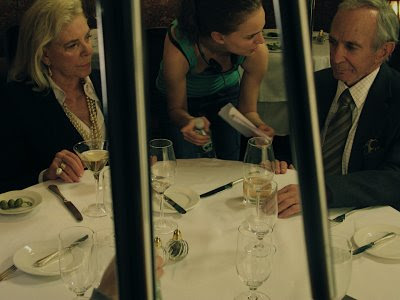 Director Natalie Portman working with Lauren Bacall and Ben Gazzara
on location at the Firebird Restaurant in New York
for the scene illustrated in the top photo above.
First, a slight digression...

...Those little star-like things on the Hamptons International Film Festival (HIFF) logo are apparently Golden Starfish. And so,the acronym is translated as the "Golden Starfish Award Shorts". (Note: See the post below for more about "Golden Starfish".)

Back to the films...

There were five shorts shown in the program:

Fingers is a simple film about a young musician who travels to Nashville to play a gig.

I Am So Proud of You is a hand-animated, manually photographed story of a life, which alternates between sardonic wit and depressingly dark humor.

JerryCan is a little bit of Austrailian boys' nasty mischief gone even worse than they planned.

Glory At Sea is a mess of a movie, but once you realize -- not made clear in the film itself -- that it is kind of a metaphor for the disaster in New Orleans; that it is made in New Orleans, with survivors of Katrina, with detritus from the storm, the film becomes more interesting. Indeed the mess of the movie becomes, itself, a metaphor for the mess that was Katrina.

The fifth film in the program, however, is not a "short film". It is a film. It is also a minor masterpiece. It is perhaps the best short film I've ever seen. The film is beautifully shot and edited, and brilliantly written and directed, by Natalie Portman (the actress).

Eve is the story of grandma who goes on a date with a widower. Her granddaughter, who has come over to visit and talk about her mother (Eve), ends up as chaperone and chauffeur, and otherwise somewhat ignored. Grandma is played superbly by Lauren Bacall, and the widower by Ben Gazzara. The iconic performers give iconic performances that make this an iconic film, a celebration of the power of life as people age.

(I thought of Vicki Christina Barcelona (VCB) , when I saw this film. VCB uses the iconic personalities and iconic performances of Javier Bardem, Penelope Cruz, and Scarlett Johansson to make an iconic film about a summer romance abroad.)

Eve (the grandma's daughter, the young woman's mother) appears in the film only as a photograph. That is a brilliant device. "Eve" is the perfect name for the film and the photograph is the perfect place for her to appear. The film is in some profound sense not just about the date, but also about the entire backstory and subtext and life that precedes the film. Eve, the missing mother/daughter provides a link to that world.

Interestingly, according to the producer, Eve was not the original title, nor was the photo of the mother in the original script. I think that illustrates why in film (as opposed to theater) it works so well to have the writer and director be the same person. In theater, every performance is a different interpretation of the script, so a director needs to let the actors free themselves from the words and own the characters. In a film, the script is just a suggestion, or notes, or a crib sheet. The film is the film. So a director can work with the material as the edit is being constructed and continue to sculpt the project until it is in its final form. The film is the only performance that counts. When the writer and director are the same person, that performance can be perfected.

With a rich and beautiful story, outstanding cinematography, and brilliant writing, directing, and acting, Eve is (one of the few times I've ever said this about a short) a film not to be missed!