That’s two projects just crying for some TLC, some attention and some fixing, with a large upside possible, really quickly.

Here’s my memo to KR:

On The Lot (OTL) has a great concept: New directors competing their hearts out for a $$$ Million dollar deal with Dreamworks, making short films (like those that get gazillions of hits on YouTube).

1 – Short films are not by themselves an audience draw – only certain kinds of films get lots of play on YouTube, and that’s not the kind of films these directors have been making -- the filmmakers have limited time and some constraints that make the films fair to middlin, at best, and not the kind that get the webonomic eyeballs.

2 – The “judging” is lackluster, the show format has little originality (it was terrible and completely derivative for a while, but it has improved to mediocrity). And the previews before each film are wrongly conceived – they don’t help the film, or hype the contest, and in some cases even contain “spoilers” that defang the films before they’re shown.

3 – There’s no publicity anymore. (There were a lot of billboards – and not much else -- when the show started.)


To fix these problems:

1 – Apply some muscle to up the energy on the show: Make the candidates into star personalities. Improve the preview films. Get the actors talking about the films. Explore the magic of filmmaking. Use rehearsals to get the judges to be more precise both in their praise and criticism. Ditch the phony boos from the audience when a judge criticizes – that’s been done to death on Idol. Set it up so the contestants can explain and defend their films, so they sound strong, intelligent and opinionated, and not defensive and argumentative.

2 – Improve the films themselves. Sprinkle in some name talent. Get the candidates working now on the films for the semi-finals and the finals, so they can be as good as possible: pre-production and script development can start on the final films, even while films are being made for the early rounds. (Some candidates will not get to make these semi-final and final films of course.) Encourage the film makers to write and direct films that are different, personal, edgy, interesting and controversial in some way, not bland and careful.

3 – Business, Show Business, and filmmaking in particular, live and die with publicity. Even feature films need lots of promotion to get viewers. With the show itself improved, and the short films improved, (and the weaker directors out of the competition), hype the remaining shows. Get the audience back. Create publicity for the contestants. Make the directors into stars. Create publicity to make the the films “important” so that people will come to watch something important happen. It can be done. The ratings are way down, which means there is a lot of room to go up!

The website is very well designed, and very rich, but very badly executed.

There are forums, blogs, lots of short films, classified ads, a gallery of actors, profiles of filmmakers and actors, contests, news of the show, news of filmmaking, all well organized with front page promos and clear tabs. And there are many more features, too...

At one point there were more than 100,000 people on the site (according to the sitemeter), now it barely gets to 35,000. At one point there was a lot of activity on the boards (a lot of it expressing frustration -- a sign of a passionate fan base that isn't getting what it needs), now there is only a little. The traffic and the excitement is there, and it can be brought back with a well-run site.

Fixing all the problems on the website, and adding a few more functions to appeal to people serious about film, and other functions for film fans, could make this one of the most valuable web properties on the Internet, for FOX/BURNETT/DREAMWORKS, film fans, and filmmakers.

The thread “HELP IMPROVE THE SHOW” has over two hundred posts. Kevin, you can HELP more than anyone else!

They list close to 300 recent, current and future shows that they cover, including shows like America's Funniest Home Videos, Deal Or No Deal, American Idol and On The Lot.


The genius of Mad Men (AMC - Thursdays at 10) is that they have imagined a time and place where everything now considered terrible is commonplace, allowing everybody to be evil, while keeping the show on the right side of heaven because that was then, this is now.

The show takes place in the late fifties in and around a Madison Avenue advertising agency.

-- Smoking is known to be a health hazard, but selling cigarettes is good.
-- A brash guy (ABG) insulting the slightly dumpy looks of "the new girl" (TNG) is criticized but tolerated; then TNG lets him steal a file from the ad man (AM) she works for; and later, when ABG shows up at her apartment after his bachelor party (he's getting married in a few days) she sleeps with him.
-- The pretty secretary (PS) shows TNG how to get along in the office by ... (we'll skip the details).
-- The gynecologist (G) warns his patient not to be a slut when he prescribes birth control pills.
-- G sleeps with his patient(s); PS, a patient of his, brags about G's beautiful house.
-- The ad man (AM) has a girl friend in NY and a lovely blond wife and kids at home on the island. The wife is sanguine about his not coming home at night; and happy to wake up and then get together when he does come home late.
-- The ad agency has no Jewish employees in any significant position; when a Jewish client visits they draft a Jewish mailroom employee to impersonate a designer/stylist.
-- The Jewish client after being insulted and brushed off by AM, has a drink with him later, and then comes back for another meeting.

Well acted. Interesting. Revolting. But that was then. This is now.

MUSIC AND FOOD FROM SPAIN AT STONE BARNS 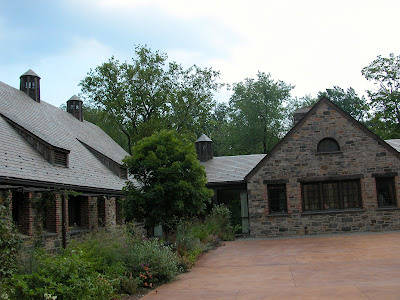 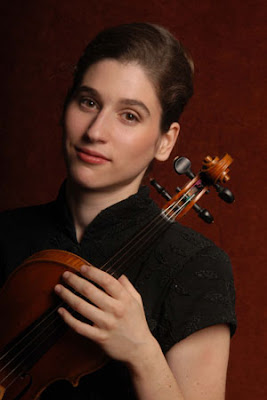 Celebrate the music and food of Spain!

Blue Hill at Stone Barns (on the old Rockefeller estate), is one of the best restaurants in the New York area, using locally grown seasonal food, and offering many special food-related events.

They are having a special dinner and concert on August 23.

The concert, featuring Sharon Roffman (left), together with some of New York's finest young musicians, will present Spanish music from the 1600's to the current moment, including a world premiere by contemporary Spanish composer, Octavio Vasquez.

This will be an amazing evening. 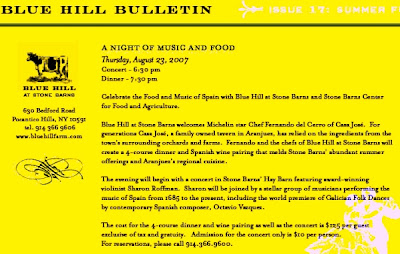 "A NIGHT OF MUSIC AND FOOD"

Celebrate the Food and Music of Spain with Blue at Stone Barns and Stone Barns Center for Food and Agriculture.

Sharon will be joined by a stellar group of musicians performing music of Spain from 1685 to the present, including the world premiere of Galician Folk Dances by contemporary Spanish composer, Octavio Vasquez.

The cost for the 4-course dinner and wine paring as well as the concert is $125.00 per guest exclusive of tax and gratuity.

Admission for the concert is $10 per person.


I've been very pleasantly surprised by Blockbuster Online. Their TV ads are misleading. In fact, the reality is better than the ads let on.

According to the ads, you can exchange the DVD you got in the mail for a DVD in the store. But it's better than that; actually, you get a free DVD in the store (which you do have to return according to store policy or pay late fees), and they send you the next DVD from your queue. So you really can have six DVD's at home at the same time, for less than the cost of their previous plan, in which I could have at most two films out at one time.


Everyone knows by now that Federer won his 5th consecutive Wimbledon title, though he was actually pushed into a fifth set -- very rare for Federer -- by Nadal.

Overlooked, however, is the fact that Donald Young, the young American player who was featured in an article in the New York Times Magazine recently, seeded third, won the Men's Junior (don't call them Boys) title, beating top seeded Vladimir Ignatic from Belarus, 7-5, 6-1. With his partner, Johnny Hamui, he also made it to the Men's Junior Doubles finals, but lost in three sets.


Here's an almost (just missed July Fourth) timely report on what hot dogs to eat this summer , from Consumer Reports, via AOL:


Today is supposed to be the luckiest day in a hundred years.

It's 7/7/7. That hasn't happened since 1907 and won't happen again 'til 2107. Sevens are supposed to be lucky. (I'm not sure why or how seven became a lucky number, but it seems to be special in many cultures; and it's a winner in many games. Here's a summary of some of the ways 7 has been featured as special.)

It's a blues musical, the second (Hustle & Flow, a hip-hop/rap musical, was the first) in a series of films by Craig Brewer that may redesign, redefine, and revolutionize the movie-musical.

Don't take it literally. It's not a sexual exploitation or a race relations film. It's a fable or a fairy tale or a metaphor or a provocation or a love story. It sits right on the edge of a cliff... of disaster, tragedy, sorrow, human shame, guilt... or redemption.

(I've always kind of wondered what it means when someone says some project is -- or should be -- edgy. This film is the embodiment of edgy.)

The acting, by Samuel L. Jackson, Christina Ricci, and Justin Timberlake is terrific. And the music is excellent: it's a blues musical. The extra features on the DVD are very interesting.

"Black Snake Moan" is the name of a song by Blind Lemon Jefferson, one of the great, legendary blues singers. But it's fair to read other meanings into the title.

Every romantic comedy (exceptions anyone?) has a very similar basic structure:

Often the couple meets cute; in any case, this part is usually fun. Couple re-unites is, also, usually fun, although at least since The Graduate, there is too often some kind of mad dash someone makes at the end, frequently to an airport, sometimes to a wedding, perhaps running or dashing in a car or stuck in traffic.

The hard part is getting them to separate in just the right way.

Serendipity separates them in just the wrong way. She (Kate Beckinsale) believes in "fate" to the extent that she contrives a "game" that results in keeping her apart from him (John Cusack) for years, until finally, later, at the point of committing to others, they decide to search for each other.

The tag line, according to imdb is "Trust in fate...it will take you where it wants to." In fact, the story is just the opposite. The actual moral of the story is: Do not trust in fate -- it will take you to the wrong place; you've got to do it yourself. (See the joke Will's son tells in The Pursuit of Happyness.)

It's a pretty lame movie, with few joyful (or sexy) moments, but it does have the following redeeming qualities:

THE MASTER AND MARGARITA


There's a very interesting event coming up for anyone interested in modern Russian/American theater. The HB Ensemble is presenting THE MASTER AND MARGARITA, a play based on the novel by Mikhail Bulgakov, adapted and directed by Aleksey Burago, with many fine actors, including the brilliant Russian/American actress Snezhana Chernova.

On a hot spring day in the 1930s, the Devil comes to Moscow. His havoc-making visit intersects with the love story of a writer (Master) and a married woman (Margarita). The Master is struggling under censorship to make his voice heard. An accidental meeting on a street begins a tale of devotion, sacrifice and love as the pair of lovers gain spiritual strength even when threatened with great danger.