The gold standard for training producers to work Broadway, off-Broadway and at other theatrical venues is the CTI course.

They run an annual 3-day seminar, which I attended last year, that is a superb introduction to the business of theater. They also have an even more intensive 14 week program, for which the 3-day institute is the appropriate prerequisite. Everyone interested in commercial theater either has, or should, attend this program.

The scheduled dates for this year's program are Friday-Sunday, May 4-6.


According to a report on CBS news, today (specifically, on "The Evening News with Katie Couric"), there are "75 million Americans with food-borne illnesses each year". That's a lot. (Is it really an accurate number? -- see below**!)

In one somewhat dubious assertion, they suggest that too large a percentage of money is going to unnecessary protection of meat. Citing Mike Taylor, a former food safety official, they say that because most food safety money — 80 percent — goes to the USDA, which visually inspects meat in slaughterhouses, it leaves insufficient budget to protect the millions of Americans who actually get sick from the invisible germs in produce.

It seems more likely that the current money allocated for meat safety is well spent (to the extent that people are not getting sick from meat), and that it's not the percentage allocation of money that goes to meat safety which is the problem -- we probably need every cent and more -- it's the lack of additional money to protect produce and other foods that needs to be addressed.

It's the opposite of the situation in the old joke:

A man has dinner for the first time at a friend's house. Every ten minutes the man claps his hands three times.

"What are you doing?" the man says.

"This keeps the elephants away," says the friend.

"What??? There are no elephants around here."

In this case, the 80% may really BE keeping the "elephants" (sickness from bad meat) away.

Senator Durbin is introducing a bill to create a single agency to oversee food safety. That should help. But, unless it is also creating a larger pool of resources dedicated to food safety, it may only be addressing a part of the problem. (75 million is a lot of sick people!)


**Is it really an accurate number? Yes:

According to the CDC:

How many cases of foodborne disease are there in the United States?

An estimated 76 million cases of foodborne disease occur each year in the United States. The great majority of these cases are mild and cause symptoms for only a day or two. Some cases are more serious, and CDC estimates that there are 325,000 hospitalizations and 5,000 deaths related to foodborne diseases each year. The most severe cases tend to occur in the very old, the very young, those who have an illness already that reduces their immune system function, and in healthy people exposed to a very high dose of an organism.

Rome, on HBO, continues to be an exceptionally interesting dramatic study of the inside personal politics, intrigue and conspiracy behind events we only know from the outside... the gross historical record.

Most of the historical information we know consists of facts and dates. (We'll call that level one.) Better information (call it level two) includes personalities, murders, elections, victories and defeats. Rome goes beyond that (to what I'll call level three) dramatizing the details of personal relationships, the big and small acts, ambitions, intentions and even mistakes that drive the events of level two.

The amount of brutality, hypocrisy, and even evil that is attributed to the leaders of Rome is truly staggering. Yet the portrayal is even-handed, distributing vice (and some virtue) to characters on all sides of every dispute, highlighting the complexity of every confrontation.

My only reservation about the show is that the aura of reality and brutality exuded by the show, though perfectly served by the fine acting, still makes one wonder whether such thuggery should not be portrayed by sounds and language that were accurate to the time, rather than the elegant British of the fine cast.


I found this article from AOL / Entrepreneur very interesting. It's a summary of 76 different hi-tech issues that a business should be aware of.

I don't agree with everything in the article, and even some things I agree with do not apply to every business. Other things (like biometric identity checks) are premature for most businesses and won't be relevant for years.

Still, it's a very interesting, quite comprehensive summary of issues to be conscious of. And some things are good advice and do apply. Other things may need to be applied differently -- in particular businesses -- from the suggestions, but do need to be considered.


Google Earth is well known, often used by TV shows as well as googlers eager to see their own house from space.

Less well known is that Google has already created Google Mars (mars.google.com)! It opens with a topographic vista of Mars' super-mountains, and allows you to roam around, clicking on hyperlinks to identify the surface features.

Click on about Google Mars for more information about the images.


As part of its Future Week, The Science Channel showed a film about recent developments in manipulating physical objects by thinking.

The video was unusually informative about how the process works:

A fairly simple tap of electrical activity in the brain -- gathering electrical signals from, in some cases, as little as 16 different points around the scalp -- provides enough information to correlate specific changes in these signals to specific thoughts by the subject. A computer monitoring the brain waves then creates a physical action -- for example, moving a robot arm, selecting a letter, making a sound, or controlling a computer to play Pong -- when it recognizes the corresponding signal.

Even more remarkable is that when the subject sees or hears the results of their thoughts, they can adjust their thoughts to move the object more precisely. And they don't even have to be human to do that: a chimpanzee can manipulate its thoughts well enough to move a robot arm to grab food and put the food in its mouth. (Who says apes/monkeys can't use tools?)

The implications are spectacular for people with paralysis. Christopher Reeve would likely have been able to restore his mobility, using mechanical body parts, when this technology is further refined. The implications are also frightening (but I won't spell that out here). The film is fascinating!

The lineup of film series from different countries -- at Lincoln Center recently -- has been extraordinary, and now there's a new series featuring French Films, beginning later in February.
Here are the details, direct from the Film Society of Lincoln Center:

Rendez-Vous with French Cinema is presented by the Film Society of Lincoln Center and Unifrance USA. Running Feb. 28 to Mar. 11 at Lincoln Center ’s Alice Tully Hall and Walter Reade Theater and at the IFC Center , the 12th edition of the popular annual series will present the American debuts of 16 French films, welcoming a distinguished list of directors and actors to New York City to introduce their works.
Filmmaker Olivier Dahan’s La Vie en Rose will open the showcase on Feb. 28 at 8:00 p.m. at Alice Tully Hall. The film, which will also open Berlin’s prestigious film festival Feb. 8, stars Marion Cotillard in the endearing rags-to-riches story of French chanteuse Edith Piaf, one of France’s most famous stage performers. Cotillard and Dahan are both expected to appear. 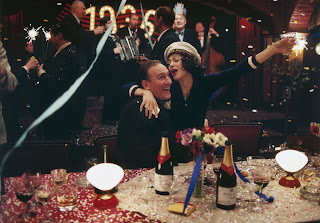 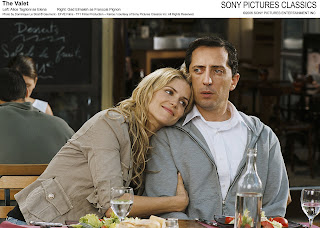 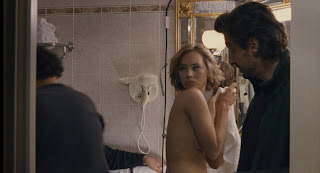 Tickets for Rendez-Vous with French Cinema go on sale Feb. 12 and are available at both the Walter Reade Theater and IFC Center, as well as online at www.filmlinc.com

Tickets for Walter Reade Theater screenings are $12 for the general public, $8 for Film Society members and students and $8 for seniors at weekday screenings before 6 p.m.

Tickets for IFC Center screenings are $12 for the general public and $8 for members and seniors all day.

The IFC Center is located at 323 Sixth Ave. at West 3rd Street.
The Walter Reade Theater is at 165 West 65th Street close to Amsterdam Avenue. Due to construction work taking place around Alice Tully Hall, the only access to the Walter Reade Theater is via the West 65th Street escalator and stairs to the upper level.
Rendez-Vous with French Cinema 2007
Public Screening Schedule 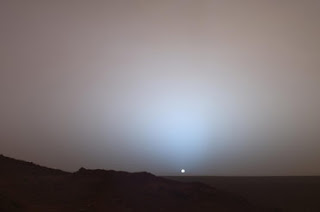 The sun setting over Mars, taken by the rover, Spirit,
from NASA.

The IMAX movie Roving Mars takes us up close and on a huge screen to the surface of Mars. It makes a nice companion to the book, Roving Mars, by Steve Squyers, the principal scientist for the mission. It shows visually and viscerally what it means to create a robotic cart that will roll around on Mars, and then explore this alien (next door) world.

The film could be longer (it's a short 40 min) and it could do a better job of distinguishing between images that are simulations, those that are constructed from real images but with lots of processing, and those that are taken directly by the cameras on the rovers, Spirit and Opportunity. Since the commentary is spare, the film might also be even more interesting and understandable to see after reading Squyer's book.

The great thing about this film is that it is the closest we'll get to the Martian soil for many years, and it's beautiful and thrilling!
# posted by QPORIT @ 1:28 PM 0 comments

EMPLOYEE OF THE MONTH


Employee Of The Month is fun, with a few witty ideas, many enjoyable moments, and a basically good-hearted theme, but just a few too many unpleasant bits to make a really good movie.

(Note: this is the 2006 version with Jessica Simpson. There was a completely different movie with the same title in 2004, starring Matt Dillon and Christina Applegate, and still another in 2002 written, directed and starring Jesse Bean.)

The biggest problem -- as with so many unsuccessful would-be comedies -- is that the villain, the hero's foil, is annoying, without being funny. He's played by Dax Shepard -- whose first film role, by the way, in Hair Shirt is credited as "Vomiter in Party".

On the other hand, Dane Cook, and Jessica Simpson, are attractive individually, and make an appealing couple. Jessica Simpson is very good here, and does everything she needs to do as an actress for this film!


Here's a quick guide to the best films of 2006. Different people have different ideas about what's best. Some very popular movies -- such as The DaVinci Code -- even made some lists of the worst movies of 2006; but many people chose to watch them, and we can all make up our own minds.

Each of these films was liked by some people, for some reason, and they're the cream of the crop to rent.

They're loosely organized into groups. Many films fall in more than one category, but this is just to help jog your memory when you're deciding what to rent next.

DRAMAS, MYSTERIES & THINGS LIKE THAT
The Black Dahlia
The Illusionist
The Prestige
Sherry Baby
Hollywoodland
The Good Shepherd
Notes on a Scandal
Monster House
Days of Glory


Saturday Night Live (SNL) skits vary greatly in quality. But every once in a while there is memorable small skit classic. One of my favorite is Helen Hunt's stewardess (Buh bye!)


Here are some interesting comments by Tim Siglin in StreamingMedia.com on the news from Davos that YouTube is contemplating some form of revenue sharing with the content providers.