Yes, the mystery of evolution has been solved. With Intelejunt Dezyne, E. Katherine Kerr dramatizes what Darwin missed. This is how it really happened.

I've seen two staged readings of this play in development and it is dangerously funny. Treat yourself & friends to an evening of historical (hysterical) discovery, explaining the hitherto unknown secrets and details of intelligent design.

(Ms. Kerr is an Obie winning actress and playwright. She also coaches and teaches actors, with studios in New York and Connecticut. Her methodology is famous for its supportive approach.)

Special note from eKatherine Kerr:
"To see one of the fifteen performances at the Fairfield Theatre Company between Nov 30 and Dec 23 for only $22 call the box office at 203 259 1036 and say the SECRET CODE:

You'll get the special discount ticket price.....and, psssst, pass this on to your friends! God will reward you!"

Check www.FairfieldTheatre.org for the performance schedule.

(In Fairfield, CT near the RR station. Look for the Orange building!)


In contrast to Cars, Accepted is promoted as a mindless escape film; yet, in some ways, it is more intellectually sophisticated. The film is fundamentally pro education, and for doing your best to do a good job, and for being tolerant of each person's needs. Its basic theme is that education works when people can study what they are really interested in. Some slackers are really geniuses who are not getting the right education.

(Now, of course, that's only part of the story. There are a lot of things more people should know a lot about whether they think they like it or not. Just for starters, Americans are woefully ignorant of the rest of the world, and -- assuming Jay Walking is for real -- they're woefully ignorant of this country and everything else, too. So, another part of the story is to make education more interesting.)

Back to the film. The male lead, Justin Long, (best known for playing the MAC on the MAC vs PC TV ads) is very good.

On the other hand, the bad-guys -- the buttoned down Deans and frat guys -- are too cliched; and -- after a great setup -- the plot is the usual predictable stuff.

All in all, it's not a classic comedy, but it's pretty funny and I enjoyed it.


Cars is great to look at. It's witty, funny, interesting, clever and it has a simple clear story. The animation is great art. The acting is excellent.

It is also boring for stretches and totally predictable. (I'm not sure predictable is bad in a children's movie.)

I have one serious issue. (Note: there's a spoiler here. If you haven't predicted the ending, and you don't want to know it, don't read any further.)

The putative moral is immoral.

Too often movies preach... If you are competitive you are without friends. And... It is good to lose even when you have really won. (Remember The Bee Season?)

The hero car goes to the end of the race, stops just before the end, and then lets another car -- the bad guy car -- win, while the hero goes to help a third car (the famous #1 car that was spun out by the cheating bad guy car) retain his dignity by finishing the race. (Note the his and not its.)

In real life (and animated, anthropomorphic cars may not be real life), when you can win a race and you do not, on purpose, that is called throwing the race. It is blatantly immoral and arguably illegal. Being in a competition is agreeing to a kind of contract: that you will compete to the best of your ability. Throwing a race (on which -- believe it or not -- people may have even bet money) is much more likely to get you sued, thrown out of whatever competitive league you are in, and vilified, than honored.

Being overly competitive to the extent of cheating is bad; to not have friends is bad; and winning something unimportant when you can do something important -- like saving the life of a spectator -- is bad. Quite frankly, however, losing is also bad -- both for you and for people who have supported you.

Being appropriately competitive, playing fair, and having friends are all good things. The real moral should be to learn to have friends and still compete fully and fairly; to fight against cheaters; and when it happens that you lose, to lose gracefully. And NOT to lose on purpose.


Here's a note from the Ensemble Studio Theatre. (www.ensemblestudiotheatre.org/ -- that's theatre not theater) :


Join us in celebrating our 35th Birthday with 35 new plays (over 35 days, more or less) by 35 of our favorite people.

Here is the line-up for November:

Purchase a Mini-Pass and get 3 tickets for the price of 2!

THE SECRET SPINE OF MARIE ANTOINETTE 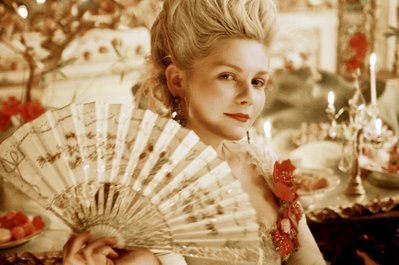 Yet it seems to be a real mess. It seems to make no sense that -- among other things --

The question is, What holds the movie together? What is the spine of the film that enables the movie to work despite these strangely unreal and unpromising elements? (The spine -- ie backbone -- is the term used for the idea that a director uses to build a single consistent vision to hold a film or play together.)

The fact that we see how tedious and artificial the life at Versailles must have been, has been siezed on by some as the point of the film. I don't find that a satisfying answer at all; but I take it for a clue.

The director, Sofia Coppola has said she is concentrating on the internal life of M. A. and that is a clue. At face value, given the the usual meaning of a phrase like that, I don't find it a satisfying answer on its own. But, I think, understanding what she really means by M. A.'s internal life, makes everything make sense.

The movie should be taken as if it were built from M. A.'s diary. It is the world of Versailles as she would see it.

The reason the film uses all those confusing accents is because, to M. A., coming from Austria, the cacaphony of all kinds of French people speaking all kinds of French would sound like that. It's a multitude of sounds, some of which are understandable; some of which is just noise; and she hears just enough incomprehensible French to remind her that she is not getting it.

Politics is not of great interest to her -- though we know it should be -- so it barely appears in the film.

The reason the treatment of her sexual relationship with her husband is so strange is that to her, she would seem natural, and her husband would just seem like a geek, one with whom she is trying to establish a relationship. This is her view. We, the audience, would view this relation quite differently if the script were written from our judgemental point of view. But it is not. This is her script of what happened.

And, finally, the gloriously luxuriant, incredibly ponderous, ridiculously mannered life at Versailles, and her general alienation as a stranger in a strange land is the center of her existence and her comprehension of the court. So they are properly at the center of the movie. But that is not the whole point of the movie. It is just part of the many consistent elements representing the world of Marie Antoinette as she would have understood it.


One of the most interesting seminar series during the last web boom was the iBreakfast seminar headed by Alan Brody.

With web ideas now getting more and more exciting, iBreakfast is coming up with interesting meetings one after another. Their next seminar (on Wed Nov 8) deals with advertising on the new video sites.

These companies range from a more selective YouTube, to video chat and IPTV-based broadcast "networks in a box."

Most of all, where is the money likely to be made?

Lydia Loizides of the Interpublic Group, moderates with a perspective from the Ad World.

Joel Smernoff was an executive at AOL and Netscape before building this site with millions of viewers.

Peter Meister was a TV executive before joining WhiteBlox.

DO IT OURSELVES READING -- ANTONY & CLEOPATRA -- SERIES FINALE


Sadly, Rodney Hakim is having the last of his public -- everyone can join in -- readings of Shakepeare's plays.

Join him for the last of a good thing on November 27th.

*** After much consideration, I have decided to end the Shakespeare reading series at Barnes & Noble with this month’s installment. We have had a wonderful run of four and a half years at the Barnes & Noble in Carle Place, and I would like to thank all the readers who have joined us over the years, as well as all those who contributed their time and talents in making the series a success. While I have other Shakespeare projects in the works for 2007, it has come time to bid adieu to this particular reading series, so I hope you will join me for the Shakespeare reading series finale on November 27th. ***

What: William Shakespeare’s “Antony and Cleopatra”

Why: “Antony and Cleopatra” is one of Shakespeare’s most achingly beautiful tragedies, and one of my personal favorites. Antony must choose between his intense passion for his lover, Cleopatra, and his duties to his family and his nation, all while trying to maintain his share of power in the Roman triumvirate. It’s a story of passion vs. pragmatism, lust vs. loyalty, and desire vs. need. The language is some of the richest and most vibrant in the entire Shakespearean canon, and it’s a wonderful play with which to close out this Shakespeare reading series.

How: Copies of the text will be provided, but it is recommended to bring your own copy of the play. For more information, you can e-mail me or visit my website.