A new report on global warming, including its economic costs, has been issued by the British government, specifically by Her Majesty's Treasury.


Mini's First Time is a pleasantly incorrigible, immoral film with completely irresponsible behavior, told from the villian's point of view. (This is not revealing anything you can't learn from the DVD box, by the way.)

Unfortunately, while the plot is amusing enough, the story is not credible. It's hard (in fact, impossible) to believe in the relationships between Mini and the two older men, Alec Baldwin and Jeff Goldblum. Mini, played by Nikki Reed (who wrote and starred in Thirteen) doesn't have a personality strong enough, nor an appearance pretty enough, nor a brain smart enough to dramatically justify a relationship with either of these two very powerful, much, much older actors (let alone both of them).

With a still more sleazy plot, sub-plots involving a few more very young girls, and much more visible flesh and driving music, this could have been a really interesting example of the California sun sub-genre of film noir. (Is that, "film soleil/noir "?) As it is, it's just a passably diverting film that starts out trying to be shocking but pulls too many punches.

REMEMBERING GODEL AT THE INSTITUTE FOR ADVANCED STUDY


There will be a program of lectures -- free and open to the public -- at the Institute for Advanced Study, remembering Kurt Godel, a logician who proved central theorems on our ability to obtain information from mathematics (Gödel's Incompleteness Theorems), and one of the first members of the Institute.

The Institute frequently provides lectures and concerts available to the public.

Reservations are not required for this event, which is free and open to the public. Seating is on a first come, first served basis. For further information, please call 609-734-8175 or e-mail .

The program will consist of talks aimed at a general audience on the life and work of Kurt Gödel (1906-1978) and his impact on mathematics, philosophy and computer science. Kurt Gödel was among the Institute's first Members in 1933-34, returning for further periods in the 1930s and 1940s before joining the Faculty in 1953. He remained at the Institute until his death in 1978.

DO IT OURSELVES READING -- TROILUS & CRESSIDA


Rodney Hakim is having another of his Shakespeare readings for everyone. Attendees can choose to participate in the reading, or just observe and listen in. Here's his letter with the details:

What: William Shakespeare’s “Troilus and Cressida”

Why: “Troilus and Cressida” is one of Shakespeare’s most criminally neglected plays, as it is both an elegant and brutal account of the Trojan War. Shakespeare casts a wide net here, covering the doomed romance between the titular lovers, the conflict between the great warriors Achilles and Hector, the deviousness of such leaders as Ulysses, and the merciless pandering of bodies and souls throughout. It’s a play rich with wonderful characters, monologues, and epigrams.

(same complex as Tower Records, across the way from Roosevelt Field Mall)

How: Just show up, and copies of the text will be provided. For more information, you can e-mail me or visit my website.


Click is a mixed bag. It has elements of comedy, tragedy (tear-jerk style), fantasy, science fiction, family film, not-family film, don't-work-too-hard-family-is-most-important morality-play, and several other genres. It does all these OK, not badly, not great.

The cast is good:
Adam Sandler playing the not quite wise adult, Kate Beckinsale playing the beautiful not-getting-enough-attention wife, Christopher Walken playing the inventor from beyond beyond, and a strong supporting casting including Henry Winkler, Julie Kavner and David Hasselhoff.

I enjoyed some of it. 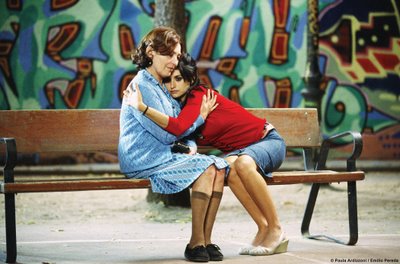 Hi… This is Eric from QPORIT – Quick Previews Of Random Interesting Things, posting from the New York Film Festival on the press conference for Volver, Pedro Almodovar’s new film, starring Penelope Cruz in another compelling performance. "Volver" means many things… Literally it’s something like “coming back,” but as we’ll show in another post, Almodovar always tries to overload his words. Right now, I want to talk about Penelope Cruz. In person, she is very alive, very endearing, with eyes that are looking at you for communication and meaning. Most striking about her as an actress – given her beauty and how often she’s mentioned as one of the sexiest women in the world -- is how natural she is. And most remarkable is that she is one of the few actresses in the entire world that has performed brilliantly, in both her native language -- hers is Spanish -- and in English. Spectacularly, in Penelope’s case she has also given award winning performances in French and Italian. Here are her remarks at the New York Film Festival Press conference, on acting with Almodovar.