What editor do you use to process VR videos?

I use Adobe Premiere Pro (PP).

(+) It is super powerful and super versatile with special VR tools. And it keeps getting more and more VR friendly.

(+) PP will automatically add the necessary meta-data for YouTube and other VR hosting sites (when you export the video "correctly").

(-) Unfortunately, as of today, it does not stitch, and (except for not stitching) it is so powerful and versatile that most of what it does is irrelevant (it was built for old-fashioned 2D framed video); and, for me, it's confusing (and often counter-intuitive and very particular about your workflow).

(+) I find that for the specific tasks I need, there are YouTube videos that explain just what I need.

There are surprisingly few books about PP, and none perfect for the VR editor. One book that seems helpful is "The Cool Stuff in Premiere Pro". Unfortunately, it is 1221 pages long (yes, PP has many features); it is also slightly out of date (even though it has a 2017 copyright), as PP keeps improving its VR features.


There is also a "user guide" from PP at
https://helpx.adobe.com/premiere-pro/user-guide.html ;

a "reference manual" pdf at
https://helpx.adobe.com/pdf/premiere_pro_reference.pdf ;

and a guide to VR editing at
https://helpx.adobe.com/premiere-pro/using/VRSupport.html .

There is no perfect editor for VR. Ideal features would include an intuitive UI plus (simple! or automatic!!)...

At the keynote for Microsoft Build, Satya Nadella introduced an impressive, staggering/mind-twisting/bewildering array of new, developing, and future products and services. The talk was primarily targeted at enterprise developers (in a number of ways) rather than at consumers (in contrast to most keynotes from Facebook, Google, and Apple).

Some of the ways in which enterprise developers were the target of the talk are:
1 - the products/services announced were largely for enterprise developers;
2 - the language used was full of words, names, and acronyms that would only be familiar to developers involved in that specific area;
3 - the examples and demos were drawn from enterprise applications.

The amount of technology described was staggering, and very impressive... if your goal is developing enterprise software, and you have enterprise support for training and team development, and you are targeting supported devices.

The learning curve to just understand what Microsoft has available and how to use it is very steep. It is not clear if the training required is conveniently and generally available.  I suspect that only enterprise customers with support from Microsoft can easily get comprehensive advanced support.

However, Microsoft has always been exceptionally supportive of individual developers who look into any particular area (as opposed to comprehensive training). As an example, in a program before the keynote, student developers presented some amazing work. A project, EasyGlucose, which was awarded a grand prize in a competition (Imagine Cup) for student developers, used smart phones, Azure AI, and other tools, to monitor Glucose levels by observing changes in the eye; it is a tour-de-force of both research and technological development, by an independent student developer. -- Project presentations, by 3 finalist teams of student developers, are available from 4:35 of the Build keynote video, currently, at https://www.youtube.com/watch?v=ZbpjLchrYgw

Assuming the keynote was directed at developers rather than consumers, the faults in its production may be somewhat excused. However, objectively, although the technology seems terrific, reviewing both the script and the presentation of today's keynote, the quality was poor.  The script -- even, I think, for many developers -- used too many undefined and unexplained words, technical terms, and acronyms, It also did not provide clear explanations about either how to use much of the technology, or what its likely usage was.  It was too much information that went by too fast; nor did it provide a clear path to researching the information.  Although there were some canned examples of showing different pieces working together, it did not really tie all the different pieces together, neither  explaining how the pieces all worked together, nor how the different pieces were different. (For example, what is the difference between Microsoft Dynamics 365 and Microsoft 365?)

The presentation seemed insufficiently rehearsed. Everyone seemed to be reading their words, not telling us. (Of course, a teleprompter is ubiquitous; the trick is that viewers should not be aware of that.) Some people giving sidebar presentations seemed to be surprised by being on camera; others seemed to be over-prepared (as when there was a cheering section as the camera moved in to the speaker). Worst of all, the event opened with what seemed likely to be a spectacular Hololens 2 live demo... that, embarrassingly, did not work at all, getting the keynote off to a sour note. (As one of the unfortunate speakers noted, "doing a live demo is hard".  A bit of sympathy here. A bunch of super-star space tech guys were, with great fanfare, announcing a project to capture asteroids in space and bring them back to the vicinity of Earth and then mine the contents. Their highly promoted live stream did not work at all. Rocket science is easy; live streaming is hard.)

In the course of this conference, Microsoft will be discussing -- in additional keynotes, and many special technical sessions -- an important and impressive array of improvements in cloud and edge services, web browsing, AI, collaboration, and co-ordination between different products (eg Azure & Hololens 2). Many of these sessions, even if not live streamed, will be recorded and made available for video on demand.

More specific, and more leisurely, descriptions of particular products and services are likely to be available in these videos.

I hope that at least one session and/or some serious effort will be devoted to general information, and technical education for consumers, indie-developers, enterprise non-technical management, and even enterprise developers. I hope for transmedia education: video, online papers, books, live public conference presentations, and more.

The array of products and services is growing and developing so fast, it will not help anyone (and will possibly hurt many) if the information about technology does not grow as fast or faster than the technology itself.


The Parallax View, one of the all-time great conspiracy films, will play on MAX tonight at 8 PM (EST).

It is a chilling movie.

On one of my most memorable film experiences, after a few weeks of screening really boring films, I saw The Parallax View and Chinatown, back-to-back on the same day.

The Parallax View stars Warren Beatty, directed by Alan Pakula, from a script by David Giler and Lorenzo Semple Jr (with - according to IMDB - uncredited assistance by Robert Towne), from a novel by Loren Singer.

Warren Beatty is well known for (among many others) Bonnie & Clyde, Reds, Shampoo, and McCabe & Mrs Miller.

Alan Pakula also directed Klute, with Jane Fonda, and All The President's Men, with Dustin Hoffman and Robert Redford.

(If you miss it tonight, or don't have MAX, The Parallax View is available for rental on Amazon Prime Video.)

for the horses running in the Kentucky Derby, on NBC, this Saturday, May 4 (the first Saturday in May!)

Notable items to keep in mind, and the most likely horses to run well, are indicated with a asterisk(*).

I've been watching the Kentucky Derby just about every year for decades, and almost always with a Mint Julep!

I visited Belmont Park a few years ago.

Perhaps the most striking thing about watching actual races live, rather than on TV, in movies, or in photos, was how hard the horses work while running the race.  On TV they look graceful.  Live, they are straining, immensely powerful, muscular, determined (beautiful , graceful) animals. 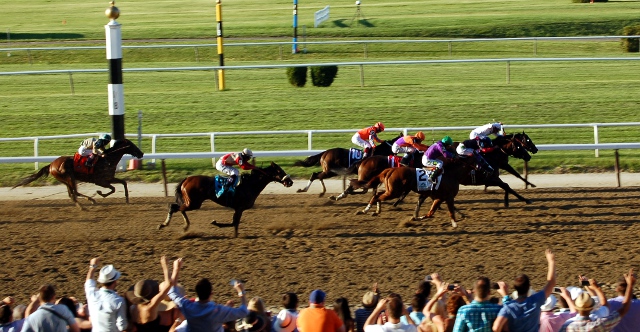 Finale of the 2014 Belmont Stakes
Photo by Eric Roffman - QPORIT

In the NYT today (race day!) Joe Drape comments on recent tragedies in horse racing, especially at Santa Anita, which has had to suspend all racing. He recommends we all wish, most of all, for all the horses running today, and always, "Let's just get'em all around there safely."

Maximum Security finishes first. But earlier, spooked by the crowd, it shifted lanes, and was DISQUALIFIED by the stewards. Longshot (65-1!) COUNTRY HOUSE wins the Kentucky Derby! >>

(While the disqualification result was controversial, it did look from the video footage as if a disaster -- with multiple horses tripping over other when Maximum Security shifted into a lane that was not clear -- was avoided mostly by sheer luck, plus quick action by all the jockeys. Let's be glad they all did get around there safely!)

A RECIPE FOR MINT JULEP

I've always tried to have a mint julep (MJ) on KD day. That's how I discovered Ruth Reichl (for a while the NYT food critic). In the early 90's she was a food critic in LA. On a business trip I knew I would be somewhere south of LA on derby day. I needed my MJ. I noticed an article she had written in the LA Times Magazine about new fine restaurants in California, and I found one that was near where I'd be. When I went there on KD day, they didn't know how to make a mint julep, but they were nice enough to try to follow my instructions, and when the first one didn't quite work, tried again and came up with something memorable, together with a really good meal. I've followed R Reichl ever since.

Here's how you make a wicked MJ. Boil a little bit of water and then put it in a cup with some washed and dried, torn up, fresh, nice looking mint leaves, to create a strong mint tea. (Note: Mint leaves are not always that easy to get, and when you get a bunch, many leaves are often wilted, or blackened. It's important to select the best leaves even if that is only a fraction of the bunch of mint in the package.)

(Experimental Note: This year I am going to try to make the crushed ice from frozen mint tea!)

Add quite a bit of sugar. (Optionally -- ideally, in fact -- some sugar could be substituted with a half jigger of a sweet liqueur like Cointreau, Drambuie, or Grand Marnier.) Add about a half jigger of a good Kentucky Bourbon. (After trying quite I few, I found that my favorite is definitely Maker's Mark.) Add this mixture with some additional torn up, fresh, nice looking mint leaves to ice in a crusher.

Crush the mixture of sweetened mint tea, and bourbon to make a tall glass worth of flavored crushed ice. Take a tall, chilled glass, add a long straw, fill the glass with the crushed ice, and then pour in a jigger more bourbon to fill up the cracks. Turn on the pre-race show, and enjoy it!

(Note: Don't drive or ride a horse or car or operate heavy machinery after this (it's strong); don't ingest with anything that will exceed your tolerance for total number of chemicals in the body! If you drink, substitute the driver!)

It's matter of taste what you eat with the drink, if anything. My own preference is Greek or similar appetizers. In the New York area, Molyvos probably has the best selection of appetizers I know of. Near Carnegie Hall, they do provide food to go if that's how you want to enjoy the Derby.

I enjoy the race, by the way, but to make the race better (since it only lasts two minutes, after all), enhancing it with slow motion replays and particular horses isolated in the picture (the more the better) is a way of greatly extending the experience. I hope the TV broadcast does a lot of that.