The new film from acclaimed director François Ozon is a sublime, heartrending saga of guilt, forgiveness, and forbidden love in post–World War I Europe. Based on Ernst Lubitsch’s 1932 antiwar drama Broken Lullaby, it charts the complex bond that forms between two strangers: Anna (Paula Beer), a young German woman grieving the loss of her fiancé, Frantz, in the war, and Adrien (Pierre Niney), a former French soldier. What plays out between them is a haunting investigation of postwar trauma and healing rendered in gorgeous black-and-white that occasionally gives way—gloriously—to psychologically charged bursts of color. A Music Box Films release.

I don’t know what the director intended, but for me this film is a meditation on lying.

The characters lie to each other, sometimes to comfort them; sometimes they lie to themselves, to assuage their grief, or imagine love, or dodge their own guilt and stoke their hate. The acting is styled, and the film is shot in highly stylized black & white, rather than natural behavior and color. Even the plot has some “contrivances” that I think are unlikely to occur in life: either the plot itself is a “lie” or the happiness it suggests is a lie, because this film takes place in the aftermath of WW I, and the story suggests the smoke that will turn into the inferno of WW II.

Review: IN BED WITH VICTORIA in RENDEZ-VOUS WITH FRENCH CINEMA 2017

IN BED WITH VICTORIA

In Bed With Victoria / Victoria

Victoria (Virginie Efira) is a hotshot lawyer with a disastrous personal life. Between juggling a demanding job, raising two kids, and fending off an ex-husband who’s slandering her on the Internet, she can barely be bothered with the hit-or-miss (mostly miss) online hookups she sets up. Around the time Victoria agrees to help her old friend Vincent (Melvil Poupaud) with a decidedly bizarre legal matter, she runs into a charming former client Sam (Vincent Lacoste). Now that a shot at real romance comes along, will the perpetually harried Victoria even recognize it? This refreshingly offbeat (how else to describe a film that features a trial in which the star witness is a Dalmatian?) farce is propelled by Efira’s irresistible performance as a heroine who’s raw, real, and complicated in ways that transcend the rom-com formula.

This is a slightly loopy movie, but fun.  It does raise some major questions about the rules of procedure in French courts.

Neither the dog nor the chimp are credited in IMDB.

Review: THE PARIS OPERA in RENDEZ-VOUS WITH FRENCH CINEMA 2017

This all-access documentary goes behind the scenes of the Paris Opera, following the array of personnel—management, performers, costumers, cleaning crew—who work to bring breathtaking spectacle to audiences night after night. Over the course of a season, director Jean-Stéphane Bron nimbly juggles a dizzying number of storylines, from labor disputes to procuring a live bull for Schoenberg’s Moses und Aron to a PR crisis involving the head of the company’s ballet. Sweeping in scope yet full of intimate human moments, The Paris Opera offers a candid look at everything that goes into operating one of the world’s foremost performing arts institutions. U.S. Premiere. 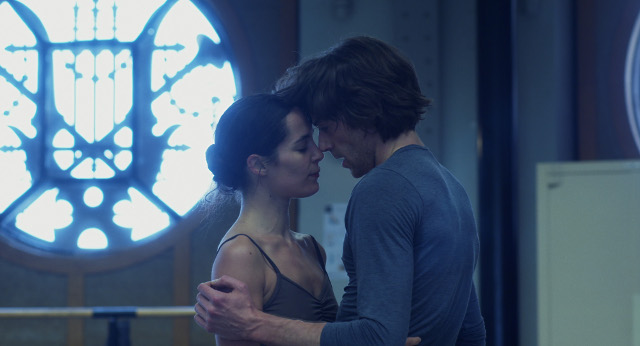 This is a terrific film that celebrates opera, music, and dance. It provides a backstage look at their preparations, management, celebrations and crises that are part of a year at the opera.

This documentary follows in the style of Frederick Wiseman (but with more love for the institution and its cultural products than Wiseman, with his often ascetic aesthetic often reveals). There is no narration, or external information provided, beyond what is said and shown in the film. While this provides a unity of experience, it also leaves many questions about who is who, and what their role is.

It has long been my belief that every documentary should have a companion (transmedia!) informational website that adds (for example) the full text of interviews excerpted in the film, the names and dates and bios of people who appear in the film, links to relevant information, and other important information that does not fit in a single 2 hour film.

(In fact, In 2009, Frederick Wiseman, himself, made a documentary about dance at the Paris Opera -- the link is below).

The film has a loose structure.  It is roughly chronological, and it follows two people in particular: Stéphane Lissner, a new Director of the Opera, and Mikhail Timosheko, a young singer with a beautiful bass-baritone voice, through a season of opera.  (And they chose well: Timoshenko now, a few years after the film was shot, seems to have a blossoming career.)

This film is a gift for all music, opera, and dance lovers… and an invitation to everyone else!

Opening Night:
Django
Étienne Comar, France, 2017, 115m
French with English subtitles
The world of legendary Romani jazz guitarist Django Reinhardt is brought to vivid life in this riveting saga of survival, resistance, and artistic courage. Reinhardt (Reda Kateb) is the toast of 1943 Paris, thrilling audiences with his distinctive brand of “hot jazz” and charming his admirers (including an intrepid friend and muse played by Cécile de France). But even as the rise of Nazism and anti-Romani sentiment force Reinhardt—whose music is considered degenerate under the Third Reich—to make a daring escape from the city, he refuses to be silenced, his music becoming his form of protest. The feature debut from acclaimed screenwriter Étienne Comar (Of Gods and Men) immerses viewers in a tumultuous chapter in the life of one of the 20th century’s greatest musical geniuses. North American Premiere
Wednesday, March 1, 6:00pm and 8:30pm (Étienne Comar, Reda Kateb, and Cécile de France in person)

Review: THE DANCER in RENDEZ-VOUS WITH FRENCH CINEMA 2017

This visually sumptuous drama set amidst the opulence of La Belle Époque Paris charts the real-life saga of modern dance icon Loïe Fuller (Soko). Raised on the plains of the American Midwest, Fuller became the unlikely toast of turn-of-the-century France with her legendary performances, in which swirling swaths of silk fabric and dazzlingly colored lights created a kaleidoscopic spectacle of color and movement. Boasting lavish period detail, breathtaking dance sequences, and fiercely committed performances by Gaspard Ulliel, Mélanie Thierry, and Lily-Rose Depp as Fuller’s rival Isadora Duncan, The Dancer is an arresting chronicle of an artist’s struggle to realize her vision.

This film presents a fascinating account of the origins of the modern dance of the late 1800's and early 1900's, focusing first on Loie Fuller, and then on her relationship with Isadora Duncan (about 15 years younger than Fuller). The first part, including a beautiful reconstruction of Fuller's dances is terrific.

This second part does try to compress too many years of history into too few minutes.

To understand the full story, it is probably necessary to look at much more information over a much longer period.  A mini-series might have been appropriate. Indeed, the early 1900's were a spectacular time of innovation in science, music, art, and in classical ballet as well as free-form dance. A larger canvas for the story would be enlightening. (In the links, I've included Wikipedia articles about the principals, and a link to Fuller's autobiography.)

One note... I was a little puzzled in the film when Fuller talks about patents for her dance, rather than copyrights.  It turns out that she was trying to patent her inventions relative to the stage lighting!

Soko, who does great work in this film, is an experienced French actress, although not well known here, previously. Lily-Rose Depp, the daughter of Johnny Depp and French model and singer Vanessa Paradis, is a young newcomer, also terrific; Lily-Rose also appears in another film this year, PLANETARIUM, opposite Natalie Portman).

FIFTEEN YEARS OF A DANCER;’S LIFE – BY LOIE FULLER
https://www.amazon.com/Fifteen-Years-Dancers-Life-Distinguished/dp/1340882035/