A WORKING OUTLINE OF EXTENDED REALITY

A WORKING OUTLINE OF EXTENDED REALITY

(Note: "GR" is a term I thought of a few seconds ago to designate "GIFTing Reality": possible holiday presents for anyone interested in VR and the other eXtended Realities. Please scroll down to the bottom of this outline for a special section on VIRTUAL REALITY HOLIDAY GIFT possibilities.)

We will be writing about these outline topics in QPORIT, with resource guides and reviews, for those new to XR as well as the experts. The articles are designed to provide an overview of the current status, and a way of looking into the future. We hope to make it easier to discover products and services, and find the resources needed to develop XR.

XR computing is the biggest advance in computer tech since the development of the personal computer.

The recent rapid development of head mounted audio and video displays, together with new sensors, including head mounted cameras, wearable and other IoT sensing devices, plus improvements in AI, faster wireless data transfers, and the continuing effect of Moore’s Law with processing units ever smaller and more powerful, make possible, now and through the next few years, dramatic breakthroughs in the applications of computing.

To understand the enormous scope of XR, here is a small table of some possible variations. It can be
Ø  Isolated from the real world (VR) or integrated with it (AR, MR)
Ø  Limited field of view (FOV) or full sphere panoramic 4π (360x180) FOV
Ø  2D or 3D
Ø  Still image or video
Ø  Linear or interactive
Ø  Single user or collaborative
Ø  Made to involve sight, sound, touch, balance, motion, position,,,
Ø  Live, recorded (image or video), digitally generated, or a mixture
Ø  Fictional, factional, or abstract
Ø  About almost anything.

Below is a working outline of XR.  We will be writing detailed stories about specific products, and surveying categories of products. Some products fall into more than one category. This outline is not complete! The outline will continue to change!

This is a working outline... not quite a first draft. There may be (aka are!) typos, spelling, formatting and other errors. Many things (categories, developers, products, services, companies, etc) are missing!

Note: This story contains many links. In this era of rampant hacking, it is always possible for even a well established company to have compromised content. New sites may not be vetted. Beware and be vigilant! Use a powerful malware filter whenever scanning websites or downloading or accessing external content, especially code.

In this outline little, if any, distinction is made between products, services, etc, that actually exist (many do not), and products that are in beta, pre-beta, alpha, rumor, or fantasy stage.

The objective is to follow this outline (as it develops) with more detailed stories about particular products, projects, services, categories, and people – in reviews, previews, interviews, and my personal views … -- using words, photos, and 2D 3D and XR videos.

Apple has a few relevant patents, but no announced projects. IBM has some relevant research. Yahoo has not made significant noise, nor has Nintendo. Cisco is active in networking, of course, and IoT. Intel has 3D sensing devices as well as fundamental chips. Amazon has AWS cloud services and retail, but not currently a VR or AR device.  Some companies are getting into XR by creating devices for the Cardboard spec.…

Lawnmower Man is an early film about a Virtual Reality project that has inspired many people to become interested in Virtual Reality, and it is remarkably prescient.

HER is a terrific film about Virtual Personalities becoming part of our lives.

I think Avatar, (but only) in IMAX and 3D, is one of the greatest movies ever made and one of the most important. I would love to see it rendered to be viewed in panoramic 3D VR on an Oculus Rift!

Here are three good books to learn how to create Virtual Reality projects.

Since the development software (Unity or WebVR) is free (though eventually if you make lot$ of $$ with Unity there is a cost) and Google Cardboard can be very inexpensive in cost (but it is recommended to get one of the better models!), there is almost no $$ barrier to starting development of real applications. Gear VR is less than $100.00 (a penny less not counting tax or shipping, but if you do not have a late model Samsung phone that is an extra cost). Gear VR is a step up from the best Cardboard HMD's (Head Mounted Displays), but an easy path is to start on Cardboard. Then the evolution to Gear VR is simple.

The Oculus Rift is several levels up from Gear VR, but it will not be available until 2016. But it is wise, if you wish to develop for the Rift, to start now developing for Gear VR..

Other HMD's including Microsoft's HoloLens, which combines generated text and images with the real world, will also begin to ship -- at least to developers -- in 2016, and they recommend Unity as a preferred development system. So beginning development now with Cardboard and Gear VR as a first target is a good way to develop skills.

"Ready Player One" is a novel that, like the movie Lawnmower Man, has inspired many people to develop an interest in Virtual Reality.

Ready Player One: A Novel

To experience VR as either a user or developer, it is necessary, of course, to get some hardware. The best hardware available now is Gear VR.

The new GEAR VR HMD (Head Mounted Display) is now available -- for orders for a penny less than $100.00.

UPDATE: As of Nov 28 2015 orders already taken are shipping from Amazon. For new orders, they are currently "out of stock". According to Samsung  (http://www.samsung.com/us/explore/gear-vr/)
an order on the Samsung site "Ships in 3 - 4 weeks. NOTE: Product may NOT arrive by 12/25/15".

.
Compared to the initial version, the new unit is:

(also, a software update from your carrier is required for S6 edge+ and Note5)

The GEAR VR is actually the only real VR device currently available. (More about Google CARDBOARD below.) Other devices will debut next year.

I have found the first version of GEAR VR to be comfortable and rather fun and pleasant to use. This new version should be even better.

There is interesting content available now. including 3D full sphere dramas. There is a lot of content experimenting with the possibilities of VR. Movies from NETFLIX are available. Some news and entertainment content is being streamed live by NextVR. Right now, the most stunning content is a collection of 3D 360 photos created by OTOY.

All you need to do is put the GEAR VR on and select content from the OCULUS store, which pops up automatically. Most content is currently free. In addition to content on the OCULUS store, there will be more and more VR apps that can be downloaded from other sites onto your SAMSUNG smartphone and then immediately viewed on the GEAR VR.

More and more content is becoming available for the GEAR VR every day. 3D video is going to get real good very soon with 4096x4096 full sphere 3D videos coming to MILK VR.

Anyone planning to develop for XR should absolutely get the GEAR VR and experiment with it. (Note: XR = VR, AR, MR or any other R. I give the whole bunch the single nickname XR - for eXtended Reality; and X is also often used for the unknown, which I think is appropriate.)

If you are developing for VR, content -- including 3D interactive apps, and 2D, 3D and spherical photos and videos -- can all be directly loaded from your computer to your smartphone and viewed on the GEAR VR. (You may need developer access to your phone to load the content.) App content can be created in either native OCULUS/ANDROID code, or using UNITY. Photos and video can be just standard photos and videos, created by an ordinary camera with an ordinary editor. But with special cameras and editors, it is possible to create full spherical 3D video content yourself.

Cardboard is an entry level version of Virtual Reality. There are many possibilities for hardware and for applications. But Cardboard is simply a specification, and it does not specify quality, so there are many implementations of Cardboard HMD's and some -- especially those actually made of cardboard -- are not always very good. I suggest a sturdy plastic version. 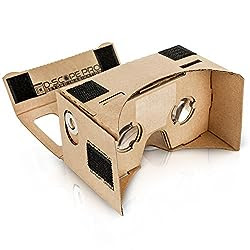 The Zeiss VR One should be one of the better Cardboard compatible HMD's. The device itself actually may cost more than the Gear VR, but it may be compatible with your current smart phone. Note that it may need a specific tray for your particular smart phone, so be sure to check the specifications for any one you purchase.

Here is some more information about the Zeiss VR One

ZEISS VR ONE ON TUMBLR
http://zeissvrone.tumblr.com/