QPORIT -- Quick Previews Of Random Interesting Things is all about finding and PREVIEWING interesting things and interesting people. Anything interesting that can be PREVIEWED is material for stories, including films and filmmakers, web video, theater, books, events, conferences, new media, new products, discoveries, science, and important issues.
www.qporit.com <http://www.qporit.com/>

We use print, photos, and (2D & 3D!) video posts. QPORIT & BOBOOBLOG stories are available immediately, online, with permalinks and can be referenced and linked to at any time.
Please let us know about films, plays, concerts, people, events, books, productions, red-carpets and openings that will make interesting posts!

Ben Affleck (40, 6' 3" tall)) is an actor, writer and director.  He won the Oscar for screenwriting with Good Will Hunting, and the Oscar for directing with Argo (not to be confused with Fargo).


He has more than 50 acting credits, notably

Konye West (35) is a musician, filmmaker, producer, and fashion designer.

The debut of his new song was just projected on buildings all over the world. Here's the video:


Here's a recap of the show:


This was kind of a strange show.  Ben Affleck threw himself into nearly every sketch, with energy and no lack of self-parody.  But most everything seemed under-written and under-directed: amusing, but more suggestive of a great sketch than realizing any of its comic (or dramatic) potential. Reading through the descriptions of the scenes, many seem to promise more humor than the scene actually delivers. Lot’s of gay themed sketches.

But perhaps what was most conspicuous about SNL tonight was the large number of film and video ad promos and previews.  Moreover, there was a cacophony of catastrophes:  one film was about the overrunning of the White House (White House Down) and three films were about the end of the world, more or less: World War Z, (Z is for Zombies.) M Night Shyamalan’s After Earth with Will Smith and his Son, and This Is The End, (a comedy) with James Franco, Emma Watson, Paul Rudd, Seth Rogan, and other celebrities all playing themselves.

COLD OPEN: POLITICS NATION – An amusing but somewhat incoherent sketch with no teeth.  The IRS affair could be skewered, but this sketch did not do much more than parody Al Sharpton’s misuse and mispronunciation of a few words.

MONOLOG -- On his fifth gig hosting SNL, Ben Affleck reflected on the lack of a celebration for his joining the 5 timers club. Then he was joined by his wife, Jennifer Garner, to reflect on having said at an Awards show that he was “working on his marriage”.  It was a little strange.

BENGO F#@#!K YOURSELF --A film starring the Iranian President, explaining how Argo was made of lies.

XANAX FOR GAY SUMMER WEDDINGS – A sedative for anyone who cannot cope with attending a bevy of perfect, absolutely perfect, gay weddings this summer.

NY 1933 – A strange scene with Affleck trying to hire a guy who is out-of-work, but who turns out to be too lazy and too interested in his career as a mugger to take the job. (I think the description is funnier than the sketch.) This seemed under-written and under-directed.  It did not quite make it to either funny or dramatic, and just barely made it to interesting enough to wonder if it could have been better.

NEW BEGINNINGS: FLAGSTAFF – A camp for turning gay campers straight.  Except to give Ben Affleck a chance to almost kiss another guy, this sketch had no real point.  The setup and the execution were both kind of phony.

KANYE WEST – A high energy performance.  The video that was screening behind Kanye, as a moving background, made this kind of a live music video.

WEEKEND UPDATE – Most of the jokes were pretty lame.  REALLY WITH SETH AND AMY (Amy Poehler came back to guest on UPDATE) was really not as sharp as usual. STEFAN was as silly as usual.  WEEKEND UPDATE paused in the middle for a parody of the climax of The Graduate, in which Seth went running after STEFAN to stop him from getting married. It was strange.

THE GREG PULINO FUNERAL  -- Another strange under-written sketch in which people gang up on GREG PULINO for having been an awful person, while GREG (Affleck) who is still alive comes in “disguised” as Greg’s Uncle to defend him(self).

HERMES HANDBAGS – The ex-hookers perform a “commercial” they wrote so that Hermes will send them handbags.  Affleck comes in to help them, but talks about herpes, not Hermes.

ENGAGEMENT PARTY – A family of emotional cops can’t get the words out to toast the engaged couple.

Well… He could have used more support, but Affleck was a game host.  There were no bad sketches, no great ones (XANAX and the final BAND were my favorites).  The show wasn’t very funny, but it was consistently amusing.

It seemed like a missed opportunity, because there were hints that Affleck could be a great comedian with the right material.

This was the season finale. Several current cast members are reportedly leaving, so it may be a new and different SNL next season.


Here are links to some other SNL stories on QPORIT:


Frances Ha, starring Greta Gerwig, directed by Noah Baumbach, and written by both of them together, was one of the highlights of the 50th New York Film Festival in September 2012.

It's a delightful madcap diary of Frances, a charming young woman who is not quite anything she tries to be, but who is charming all the same.  It's a picture of Generation-C (Confused).

I was surprised the film did not appear in theaters anytime soon after its screening at the Festival, but it seems to be that the filmmakers were going after some big time publicity for a "little" indie film. And they got some: In the last month or so the film has received

(Trivia note from IMDB: Noah "Briefly worked as a messenger at Manhattan's The New Yorker magazine.")

The film, with an unsympathetic/sympathetic main character, has an original, non-Hollywood-formula style construction, and a casual, almost improvised feel to it. But, as described in the article above from the NYT, the film actually was carefully scripted, and painstakingly shot, with a 50 day schedule (almost twice as long as most indie films) and an average of 45 takes per scene (more than twice the norm).

Despite Frances' travails and floundering, the film has an irrepressible humor and sense of joy. 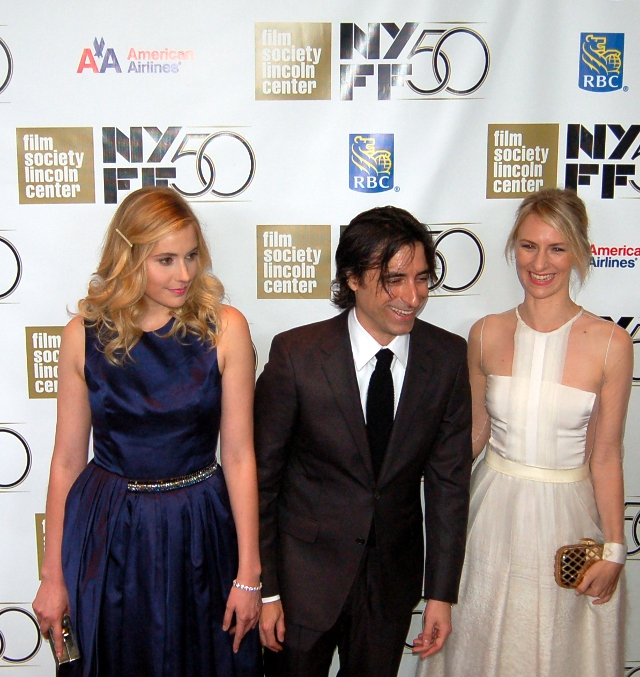 Noah Baumbach is 43, was married to Jennifer Jason Leigh, and is now reportedly in a relationship, personal as well as professional, with Greta Gerwig.


Greta Gerwig is 29, a tall 5'9", and known for her original personality and style, her work with "Mumblecore" films and for films including...

Mickey Sumner plays Sophie, Frances' close friend; she played Francesca on a series of episodes of The Borgias.

Adam Driver had roles (not that different) in both Frances Ha and Girls. He was a "Breakthrough Performer" at last year's Hamptons International Film Festival.

Frances Ha: A story that follows a New York woman (who doesn't really have an apartment), apprentices for a dance company (though she's not really a dancer), and throws herself headlong into her dreams, even as their possible reality dwindles.


The Film Society of Lincoln Center (aka FSLC or FilmLinc)  is accepting submissions for the 51st New York Film Festival (NYFF). The festival will take place September 27-October 13, 2013.

The festival hosts an average of 28 feature films in the main slate and 16 short films selected each year.


Founded in 1963, as auteur theory and European cinematic modernism were crashing on to the shores of American film culture, the New York Film Festival stands as the second-oldest film festival in North America, and one of the oldest in the world.

For its 51st New York Film Festival, filmmakers are invited to submit their shorts, feature films, and Views from the Avant-Garde films for

See below for a recap of the show:


Kristen Wiig, who was one of the funniest members of the cast until she left the show in 2012, returns to SNL, to host for the first time.

Kristen's films include  Bridesmaids, (which she co-wrote), MacGruber, Flight of the Conchords, Adventureland, and Paul.

VAMPIRE WEEKEND is an American indie rock band.  Its members are:

Here's a recap of the show:


This was a better than average show.  The writing, direction and acting all seemed strong.  The sketches were a little richer, more animated and more inventive (and funnier) than some other recent shows.

COLD OPEN – Congress added Jody Arias to the list of witnesses at the Get-Hillary hearings to harden the ratings.

MONOLOG – This didn’t make complete sense, but it was fun.

1-800-FLOWERS a commercial for flowers for Mother’s Day.  Ah Mom!

SOAP NET: THE CALIFORNIANS – This was the best version of this sketch yet.  (It seems like it’s a favorite of the cast because it is one of the few sketches where they can not keep from breaking up.) My favorite parts were the slow feint, and washing the mirror.

Some promos & ads: Ben Affleck is coming for the season finale. The “More’s Better” commercial was a nice little big hug for mom.

THE LAWRENCE WELK SHOW: SINGING ON THE BEACH – This was slightly amusing, but it didn’t quite seem to have a point.

WEEKEND UPDATE – The jokes were OK. SECOND HAND NEWS was just really bad jokes. GARTH AND KAT is not funny, except for GARTH AND KAT who have a great time.  (Note: It’s true:  talking at the same time your scene partner is and saying the same thing is much more fun than watching someone else do it.)

TARGET LADY – This is one of Kristen’s weakest characters.  I’d have preferred a sketch with one of her more interesting roles.

DOUGLASTON WELLNESS CENTER – Acupuncture needles start spouting more and more fountains of blood.  A bloody funny and yet kind of understated sketch. Best of the night.

It seemed like some extra effort went into this show. It was nice to see Kristen Wiig back.