FOXCATCHER is a sharply made “essay” about the strange episode in the 1980’s and 90’s, when John E. du Pont, an heir to the du Pont fortune, founded and supported the “Foxcatcher Team” of wrestlers.

Though based on true events, the film, of course, both simplifies the story (shortening about a dozen years into two hours) and provides an implicit, though complex, interpretation.

Steve Carell is brilliant as du Pont, as are Channing Tatum as Olympic wrestler Mark Schultz, and Mark Ruffalo as his brother Dave (also an Olympic wrestler, and a coach). Vanessa Redgrave makes a brief but powerful cameo as du Pont’s mother. 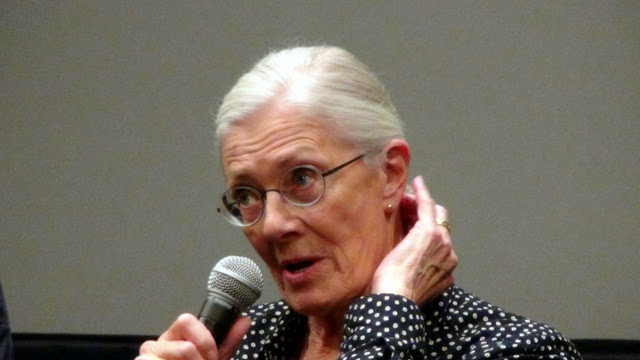 Vanessa Redgrave
at the NYFF 2014 Press Conference for
FOXCATCHER
The film is quite unlike any other “sports film”. Indeed, though filled with wrestling, it is not a sports film.

In the mid eighties, John E du Pont created a training facility on his family property “Foxcatcher” for wrestlers planning to compete in the 1988 Olympics in Seoul Korea. He invited Olympian Mark Schultz, and later Mark’s brother Dave (accompanied by Dave’s wife and children) to train and coach and live at Foxcatcher. In 1996, du Pont shot and killed Dave Schultz in front of his house. The mystery is why.

FOXCATCHER is director Bennett Miller’s take on that story.

Much to Miller’s credit, he provides no simple answer to the mystery of why du Pont shot Dave. Indeed, the film is an even-handed description of many points of severe stress that afflicted du Pont.

(It should be mentioned that du Pont’s story, as told by Wikipedia, is both more complex and yet simpler than the story in the film: Wikipedia describes a young du Pont as a PhD scholar, an author of several books on ornithology and a founder and leader of a natural history museum. It shows him as a far greater sponsor of athletic training – not just wrestling -- than is described in the film. The article also mentions that he was married briefly -- it was annulled after 90 days – and speculates on du Pont’s problem as being a descent into paranoid schizophrenia, with delusions.)

Miller’s take is less simplistic, and does not describe a major shift in personality from successful young scientist to clearly deranged, delusional older man. Rather it shows a slow accumulation of problems.

In the film, du Pont is tortured by many things… 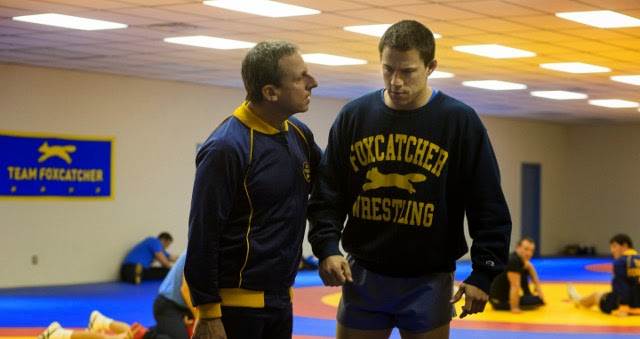 Left to right: Steve Carell as John du Pont and Channing Tatum as Mark Schultz
Photo by Scott Garfield,
Courtesy of Sony Pictures Classics
The film details encounters and events that estrange du Pont from Mark, prevent du Pont from gaining any personal or public recognition as a successful supporter – much less coach – of athletics, and leave him with (perhaps) great jealousy of Dave’s success.

The film does more than describe du Pont. It is about wrestling, about the intimate relation between the Schultz brothers, and about how class affects one’s life; and how classes can clash, even when everyone involved is trying (most of the time) to create something class-less together.

As a result of the way the film describes the gradual evolution of du Pont’s relation with Mark, Dave and himself, the climax – even when you know the story – comes as a shock.

Years of preparation went into the making of the film. First, research -- by Bennett and the authors of the screenplay -- about du Pont and the Schultz brothers (aided by many living people, including Mark Schultz and Dave’s widow, Nancy), then, a careful study by each actor of the character they play, aided in part by Bennett’s extensive research.

The depiction of wrestling athletics in the film feels authentic. It was the result of extensive training. Ruffalo had a background as a wrestler in High School (much of which had to be un-learned to play an Olympic class wrestler physically different from Ruffalo with a style all his own), and Channing, while not having wrestling experience, is strongly athletic. Miller previously directed Moneyball, another not-sports-film that was steeped in the world of sports.

Similar effort went into the creation of all the details of the settings for the film; as well as the nature of Steve Carell’s makeup, giving him the distinctive look that helped create his character.

Given the amount of time and effort that went into developing this film, it is not surprising to realize that the producers Megan Ellison (Annapurna Pictures), Jon Kilik, and Anthony Bregman are variously responsible for such other great pictures as HER, THE ETERNAL SUNSHINE OF THE SPOTLESS MIND, THE HUNGER GAMES, ZERO DARK THIRTY, THE MASTER and AMERICAN HUSTLE.

What makes the film so fine is the exemplary depiction of the progression of this story, all excellently acted and dramatically effective. It is not a pleasant film, but it is exceptionally affecting.