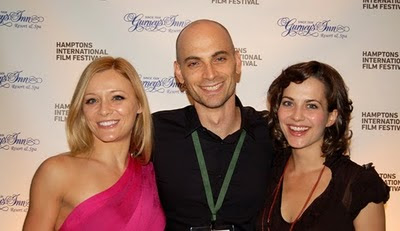 Emily (Mikal Evans) brings her current boyfriend, Alex (Brad Coolidge), for the weekend to a beach house in the Hamptons belonging to her old friend, the beautiful, blond, "flirty" Chloe (Robin Singer). 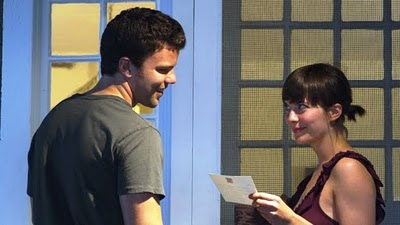 The TITULAR Postcard: it tells Emily and Alex to let themselves in
The note is signed,
"Kisses, Chloe."
Brad Coolidge and Mikal Evans
In a scene from KISSES, CHLOE
Patterns that the characters identify in each other's behavior are repeated. According to Emily, Chloe just wants to be loved. According to Chloe, Emily is immature, her relationships deteriorate quickly, and she will hang on to ex-boyfriends forever. Also according to Chloe, Alex is a "triangulator:" a guy who gets into relationships with women as long as there is a third guy in the picture to vanquish (and, she points out, Emily has no other boyfriend anymore).

The film features singularly casual and extensive conversations about the sex lives and hook-ups of the characters.

The tone of the film and the behavior of the characters is new and different.

There are only three characters in the film. Just three people talking, alone together in one house by the water. Talking a lot about sex and their sexual experience. And when they are not talking, there is silence. Awkward, painful, uncomfortable pauses, gaps in the conversation. 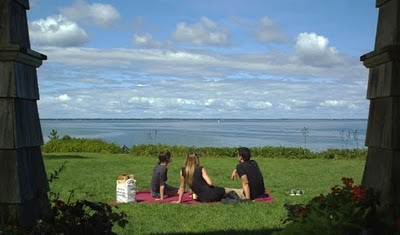 Mikal Evans, Robin Singer and Brad Coolidge
In a scene from KISSES, CHLOE
Both screenings of the film at HIFF were sold out. A few audience members (mostly couples in middle age), after half an hour or so of sex talk and awkward silence got up to leave. But the revealing fact is that they did not slink out or leave quietly. They announced their own morality with loud, public exclamations such as "Terrible!" "Worst movie I've ever seen!"

When audience members need to justify their own discomfort, it is a sign that a movie has touched a nerve. The remaining audience, almost everyone, seemed very enthusiastic about the film, and what it was saying.

The film script itself is very conspicuous. The film seems to be very much about what the characters are saying. It is about sex talk. There is very little touchy-feely. The one time we see the characters doing sex (not having sex? not making love?) Alex is making Emily tell him about her sexual experiences with Chloe. While the actors don't wear much at the beach, there is no nudity.

The dynamic seems to be:
=>Emily is immature,
=>the relation with Alex may be no longer at its best, and
=>bringing him to meet Emily may be a mark of naive simplicity -- not recognizing the pattern in her relationships, or
=>it may be a test of her relationship with Alex.

Emily goes to bed early, leaving Alex and Chloe alone a lot in the late evening and at night. Emily is passive, Alex is passive, and Chloe is passive even as she talks about sex. The passivity and the casual sex talk, followed by the honest ending is the unique mode of this film. 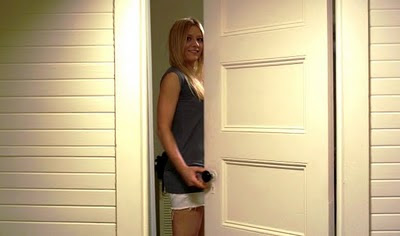 Robin Singer
In a scene from KISSES, CHLOE
Despite (or because of) all the sex talk, it seems to me that there is a pervasive feeling of loneliness. Each of the characters seems lonely in their own way. Emily retreats to bed. Alex and Chloe talk (and retreat). But connections are hard to make. They try. At the end, perhaps Emily has grown up enough to connect the next time.

Great plays (more than most films, which seem fixed in their visual interpretation and are generally hard to re-make successfully), are different (sometimes very different) with each different realization. And here, too, with a film in which the script seems primary, we can imagine making a completely different film without changing the words hardly at all.

Virtually the same script could support a very different film, in which passivity is replaced by strong (secret) objectives for each character:
=>Emily comes to the house to rekindle a relationship with Chloe;
=>Alex is deeply in love with Emily and comes to the house to re-consummate, re-energize his relation with her; and
=>Chloe wants Alex's bones.

Is Emily willing to "sell" Alex to Chloe, in return for Chloe's sexual attention? In this version of the film, there is nudity, there is a lot of touching, there are no awkward silences, and somewhat rough and "ugly" sex between Alex and Chloe is shown quite explicitly.

This version is not a better film, but it is a very different film that could use almost exactly the same words. Comparison of the film that Padilla did make with the one (I just described) he did not make, may illuminate the intentions of the filmmaker, and his take on these characters.

There are some significant similarities in style and aesthetics between this film and another film I liked (a lot) recently, The Romantics, which could be, in some sense Kisses, Chloe's older sibling (I call it with neutral sexuality a sibling, because I'm not sure if it's an older brother -- because it's robust; or an older sister -- because The Romantics is very much a woman's movie).

Just to be clear, first of all, of course, the films are different in that The Romantics is a much "bigger" film, with many, very famous actors (compared to just three not (yet!) famous actors); a (not that big, but) much bigger budget; and a (short, but) much longer shooting schedule than Kisses, Chloe's mere 12 days. The characters in The Romantics are perhaps ten years older, more educated and (somewhat) further along in their lives and careers than the characters in Kisses, Chloe.

But the two films are similar in their simplicity, honesty, naturalistic style, and emphasis on the characters as real people. They are both dramas about love and sex.

Both films are about a triangle, with a rather passive man (Brad Coolidge has much the same role as Josh Duhamel) in the middle between two women that have a long standing friendship and a long standing rivalry.

Kisses, Chloe, is an independent, low budget film about modern singles. The commercial success of this film, I suspect, depends on positioning it as a brilliant portrayal of the sexual lifestyle of modern young singles, realized by a quartet of 3 rising young stars, and a director with a striking new vision.

This quartet: the director and all three actors, are people to watch and follow! 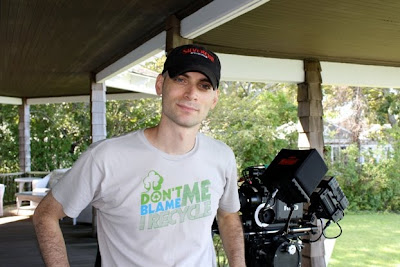 Kisses, Chloe, is director Stephen Padilla's second feature film. His first feature, The Little Things, was one of nine films selected for the IFP Independent Filmmaker Labs. It was named “Best of the Fest” at the Philadelphia Film Festival, won the Audience Award at Red Bank and received a Gold Remi Award at WorldFest.

His play, Picking Palin at the 2010 Fringe Fest in New York was a major success.

Stephen has an M.F.A. in Film from Columbia University and a B.A. in Screenwriting from Georgetown University. 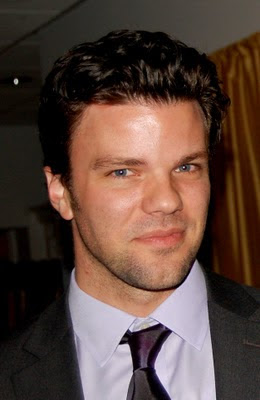 Brad is a theatrical and film actor. He appeared in the screen adaptation of Jean-Paul Sartre’s No Exit (Slamdance Film Festival). He has appeared on stage in The Drilling Company’s production of Much Ado About Nothing, Romeo and Juliet and The Tempest. He was also, apparently, very popular at FAO Schwartz (see his link below). 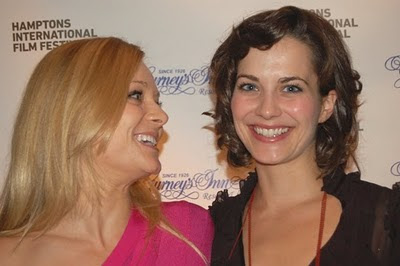 Robin Singer and Mikal Evans
From KISSES, CHLOE
On the Red Carpet, Opening Night at HIFF 2010
Photo by Eric Roffman

Mikal is a terrific, subtle actress, with a lovely, warm and friendly face and personality. And she's a beautiful singer / songwriter. She provided many of the songs on the film soundtrack. She is frequently seen around town in performance: solo and with her band. Before playing Emily in Kisses, Chloe, she appeared on stage in Eighteen, Twelfth Night and Haroun and the Sea of Stories. Her critically-acclaimed debut solo EP, A Jailhouse . . . A Kingdom, was released by Gypsy Eyes Records. 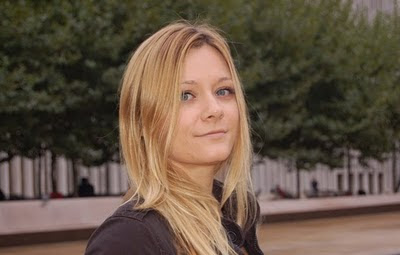 Robin is a beautiful, serious actress (and writer). She has the special quality in Kisses, Chloe of being both committed and distant at the same time, simultaneously outrageous and simply natural. The best actors seem to be archetypes of a specific personality of a certain generation, and Robin has that quality.

As an actress, she is always perfectly prepared -- I've seen her at work -- and always interesting. She's easy to work with. Both at work and outside of work she is genuinely nice, serious, friendly, and she giggles a lot.

Robin has appeared in a number of films, including Little Kisses (written by Neil LaBute), and Battle of the Bands (LA Reel Film Festival). She has an award winning screenplay working its way through the "system". She has new roles in a film called "Work It Out" and a comedy web series called "Public Relations," both currently in post-production.