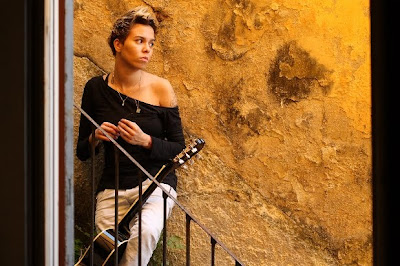 Singer Maria Gadu
CELEBRATING THE BEST OF CURRENT BRAZILIAN CINEMA
AND HONORING THE 50TH ANNIVERSARY OF THE FOUNDING OF BRASILIA
THE COUNTRY’S CAPITAL CITY
The CINE FEST PETROBRAS BRASIL is back for its eighth edition this year – June 5th thru June 12th. As always, the competitive screenings will take place at the Tribeca Cinemas while the annual outdoor spectacular at Summerstage, which usually opens the event, will take place this year as the Closing Night excitement. The 8TH CINE FEST PETROBRAS BRASIL is presented by the Inffinito Group.

The Festival will kick off at the Tribeca Cinemas on Saturday night, June 5th with the Opening Night film, THE WELL BELOVED ONE (O Bem Amado) (description below), and other screenings followed by a rollicking Brazilian party. For the next 7 days and nights, the most exciting cinema Brasil is producing will be on tap, followed each night by a reception complete with caphirinas and a hot Brazilian DJ. Many of the filmmakers and cast members from the 8th CINE FEST PETROBRAS BRASIL film presentations will be in New York to attend the festivities and participate in Q & A sessions following the films. 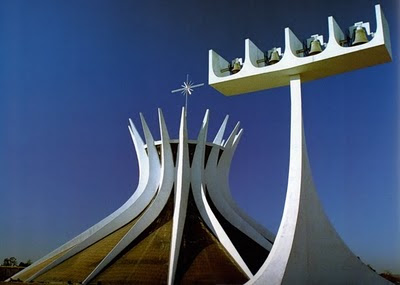 
PARALAMAS DO SUCESSO is the most successful Brazilian rock band with over 12 albums released and a strong international following. Formed in the early 80’s, its members are Herbert Vianna (guitar and lead vocals), Bi Ribeiro (bass), and João Barone (drums). In its beginning, the band combined reggae and ska with rock, but later added horn arrangements and Latin rhythms. The Paralamas are considered part of the “Brasilila Gang” and are one of the "Big Four" bands of Brazilian rock. MARIA GADU is one of the rising young stars of Brasil’s music scene. Only 22 years-old, this singer from Sao Paulo has easily won over the Brazilian public with her beautiful voice and compositions and now the international audience!!

This year’s CINE FEST PETROBRAS BRASIL will be paying homage to the country’s capital city – Brasilia – as it celebrates its 50th Anniversary. There will be an exhibition at the Tribeca Cinemas to illustrate the construction of the city by the very well-known architects Oscar Niemeyer and Lucio Costa. The celebration of the city continues with the Summerstage film & concert as both Paralamas do Successo and Maria Gadu hail from that city. And a number of the films and/or filmmakers are set or are from Brasil’s most modern city.

Tickets for the 8th CINE FEST PETROBRAS BRASIL are on sale at
http://www.ticketweb.com/ (enter PETROBRAS or TRIBECA CINEMAS in the search bar) and are $10 for each film.

Many special events are free. Check the phone number below for more information.


CABEÇA A PRÊMIO, Drama / 2009, Directed by Marco Ricca and starring Alice Braga, Daniel Hendler, Fúlvio Stefanini, Otavio Muller, Eduardo Moscovis, Cássio Gabus Mendes, Ana Braga, Via Negromonte and Cesar Troncoso. Decadence, power, betrayal. Three stories get intertwined in the arid border landscape – the end of the line where Brasil, Paraguay, and Bolivia meet. A land of strayed away, forgotten, disillusioned characters. An important cattle farmer and smuggler, his impulsive daughter in love with the father’s airplane pilot, and the gunman, who ordered to bring her back – himself victim of a love story.


ELVIS & MADONA, Comedy / 2010, Directed by Marcelo Laffitte, featuring Igor Cotrim, Simone Spoladore, Sérgio Bezerra, Maitê Proença, Buza Ferraz, José Wilker, Alexandre da Costa, and others. A romantic comedy that deals with an unusual subject in a delicate and realistic way: a love story between young lesbian, Elvis and a transvestite, Madona. The story takes place in Copacabana, in Rio de Janeiro. The screenplay comprehends a full array of human types and, by following the journey of both protagonists, illustrates the conflicts generated by the evolution of behavior and custom. It is a modern and agile picture, and its soundtrack will follow the latest musical trends. Nevertheless, it is essentially a love story, proving that love can exist in any situation.


LOVE STORIES LAST ONLY 90 MINUTES (Histórias de Amor Duram Apenas 90 Minutos), Narrative / 2010, Directed by Paulo Halm, featuring Caio Blat, Maria Ribeiro, Luz Cipriota, Daniel Dantas and Lucia Bronstein. Zeca, a young writer, immersed in a novel he cannot write, lives an idle life. He is 30 years old, but behaves like a teenager. He is talented, but unfocused: he’ll write two sentences, then abandon the work. He has a strained relationship with his wife Julia, as a result of their antagonistic temperaments: Zeca is unmotivated, while Julia knows exactly what she wants. Zeca is unhappy, but appeased. Until the day that he starts to believe that Julia is cheating on him. And, much to his dismay, with another woman.


SO NORMAL 2 (Os Normais 2), Narrative / 2009, Directed by José Alvarenga Jr., featuring Danielle Winits, Drica Moraes, Cláudia Raia, Daniele Suzuki, Mayana Neiva, Alinne Moraes, and Daniel Dantas. It’s a mistake to think that Rui and Vani’s saga had come to an end. Luiz Fernando Guimarães and Fernanda Torres bring back their outstanding characters in Os Normais. Just like in TV Globo's series and in the first feature film, a good laugh is guaranteed when the couple decides spice up their relationship and goes after someone to join them in this adventure.
SUNSTROKE (Insolação), Romance / 2009, Directed by: Felipe Hirsch and Daniela Thomas, featuring Paulo José, Antonio Medeiros, Simone Spoladore, Leonardo Medeiros, André Frateschi, Maria Luisa Mendonça, Leandra Leal, Jorge Emil, Daniela Piepszyk and Emilio di Biasi. Sunstroke tells stories of unrequited Love. “Love and loss. Loss, mostly”, says a character. In an empty city, scorched by the Sun, the young and old confuse the fever of sunstroke with the delicate birth of passion. Like ghosts, they hover through buildings and endless flatland in search of the ever elusive Love. Inspired by 19th century Russian short stories, the plots weave and unravel together in the improbable city of Brasília – a distorted mirror-image of the soviet utopia – located in the heart of the Brazilian desert. Paulo José, the actor whose life is intertwined with the history of Brazilian cinema, plays Andrei, the nostalgic witness of these stories.
TIME OF PEACE (Tempos de Paz), Drama / 2009, Directed by Daniel Filho, featuring Tony Ramos, Dan Stulbach, Daniel Filho, Louise Cardoso, Ailton Graça, Anselmo Vasconcelos, Ewa Stulbach, and others. The whole story takes place on the 18th of April in the year 1945. The battles had ceased in Europe, but Brasil still found itself technically at war. The encounter between the interrogator, a customs official and former-torturer for the Political Police of President Vargas and a Polish ex-actor who had lived the horrors of war but was suspected of being a Nazi fugitive, takes place in the Rio de Janeiro port immigration office. The film portrays a critical period of Brazilian history and speaks of Manichaeism and of fighting for life.


THE WELL BELOVED ONE (O Bem Amado), Comedy / 2010, Directed by Guel Arraes, featuring Marco Nanini, Matheus Nachtergaele, José Wilker, and others. Based on the literary work of Dias Gomes, O Bem Amado tells the story of the mayor of Sucupira, Odorico Paraguaçu, who has as his main aim in his administration the inauguration of a cemetery. On one side the Cajazeiras sisters support him. On the other he has to fight the strong opposition led by Neco Pedreira, owner of the town's gazette.

PROGRAM - DOCUMENTARIES
MAMONAS 4-EVER (Mamonas Para Sempre), Documentary / 2009, Directed by Cláudio Kahns. Mamonas Forever is the amazing story of five talented musicians, from the suburbs of São Paulo to the biggest success in the Brazilian music history. After five years playing dense rock music and performing' seriously as Utopia band, chance knocked on the door. There was only one request, they had to show their extroverted selves: happy and irreverent. What was sad became funny and satirical in all senses, and the Mamonas Assassinas were born. In only 10 months they put the country upside down and as never seen before, rock music united families to sing, dance, laugh and cry.


OSCAR NIEMEYER – LIFE IS A BREATH OF AIR, Documentary / 2007, Directed by Fabiano Maciel. Is it possible to tell a story of a nation through its architecture? It’s been said that the most important aspect of a building is the legacy that it represents for the society that built it. Therefore the work of Oscar Niemeyer, and his generation, is undoubtedly the best Brasil has ever produced, architecture with a soul of its own inspired in the country’s geography and that influenced architects worldwide. OSCAR NIEMEYER – LIFE IS A BREATH OF AIR is a movie that without trying to imitate the uniqueness of its subject relies on the precision of his lines and on the poetry of his forms, in order to reconstruct the history of the greatest icon of Brasil’s Modern Architecture.

QUEEN OF BRASIL (Rainhas), Documentary / 2010, Directed by Fernanda Tornaghi and Ricardo Bruno, featuring Fábio Mota, Otacílio Júnior, Marcos André, Alexandre Braga, Nany People, Luiza Ramil, Cleidina Mota and Aline Mota. Fábio is a small town boy from the Amazon region. He departs to Rio de Janeiro hoping to become the next Miss Gay Brasil. The documentary tells the story of Fabio and his partner as they embark on a journey towards a little known national beauty pageant which mobilizes the lives of hundreds of guys around the country – all pursuing the dream of being crowned Brasil´s most beautiful girl.

RITA CADILLAC - THE LADY OF THE PEOPLE (Rita Cadillac – A Lady Do Povo), Documentary / 2010, Directed by Toni Venturi, featuring testemonials by Rogéria, Drauzio Varella, Hector Babenco, Djalma Limonge Batista, Leleco, and others. Queen of the truck drivers, gold miners and godmother of jail inmates. Sex symbol in the 80’s, Rita Cadillac was the fantasy of a whole generation of Brazilian males. Now middle-aged, she has starred in 3 adult films in order to earn money for her retirement. An intimate documentary about the star and her private life.


STRAIGHT TO THE POINT (Onde a Coruja Dorme), Documentary / 2010, Directed by Márcia Derraik and Simplício Neto. This engaging documentary profiles Bezerra da Silva, a Brazilian music legend known as the father of “gangsta samba.” Da Silva’s songs, many of them written by residents of the slums of Rio de Janeiro, are social critiques that champion the underdog who must do whatever it takes to survive.

WITHIN THE RIVER, AMONG THE TREES (No Meio do Rio entre as Árvores), Documentary / 2009, Directed by Jorge Bodanzky. It is the result of an expedition to the Alto Solimões that ministered video, circus, and photography workshops to the creeks communities inside the reserves. The film was made by them, from the recently-learned technology, with an insider view aiming abroad, without interpreters. From the hearth of the Amazon to the world, we come to know how It is the daily life of these people who live in the farthest reach of Brasil. What they think, what are they’re dreams and hopes, how they solve the problems they face for living within the river, among the trees.

This year the Inffinito Festival Circuit was present in Canudos and will appear in Miami, Vancouver, London, Rome, Montevideo, Buenos Aires, Madrid and Barcelona before the end of the year.

Comments:
I tried the site ticketweb for tickets and the festival is not listed. Are they on sale at the theater? Please advise, thanks.

http://www.ticketweb.com/
(enter PETROBRAS or TRIBECA CINEMAS in the search bar) and are $10 for each film.

Tickets are also on sale at the theater.

Many special events are free.

Check the phone number below for more information.