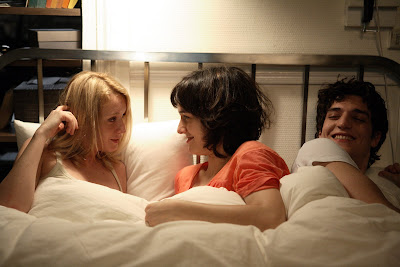 Academy-Award winner Claude Lelouch will kick off the series on Opening Night by introducing his wry, multifaceted thriller Roman de gare at the Walter Reade Theater, Friday, Feb. 29, at 6:30 p.m. and 9:00 p.m.

Fanny Ardant stars in the film as a best-selling author researching her next crime story. At the same time, a notorious serial killer escapes from prison and Paris hair-dresser Huguette (Audrey Dana), looking to change her destiny, picks up a man at a roadside rest stop. Dana received a César nomination as Best Female Newcomer for her performance in the film.

L’Auberge Espagnole director Cédric Klapisch presents Paris, an emotional tour of the city through the eyes of a man waiting for a heart transplant, starring Romain Duris and Juliette Binoche.

Writer/director Noémie Lvovsky’s Let’s Dance! offers an original and energetic look at a Holocaust survivor turning 80, and just discovering that his life has not been fully lived.

The Diving Bell and the Butterfly actor Mathieu Amalric stars in two films in the series, alongside Sagnier, Patrick Bruel, Cécile De France and Julie Depardieu in Claude Miller’s multiple César nominee A Secret and as a troubled corporate psychologist in Nicolas Klotz’s Heartbeat Detector.

And acclaimed actresses Sandrine Bonnaire and Sophie Marceau demonstrate their impressive range by writing, directing, and appearing in a touching documentary memoir of autism, Her Name Is Sabine, and a gritty film noir, Trivial, respectively.

The 2008 edition of Rendez-Vous is not short of new faces and fresh debuts, highlighted by an astonishing collaboration. Six cutting edge comic book artists join together to create Fear(s) of the Dark, a provocative, black-and-white fantasy that weaves horror into science fiction and adds to France’s growing reputation, following The Triplets of Belleville and Persepolis, as a hotbed for animation. 23-year-old director Audrey Estrougo debuts her first film, Ain’t Scared, a captivating, day-in-the-life story that explores racial dynamics and adolescent life in the Parisian housing projects known as “les cités.”

Actress Mia Hansen-Løve steps behind the camera and delivers a refined and heartbreaking vision of a daughter’s reunion with her heroin addicted father, All Is Forgiven.

Tickets for Rendez-Vous with French Cinema are on sale Feb. 14 and are available at both the Walter Reade Theater and IFC Center, as well as online at http://www.filmlinc.com/ and http://www.ifccenter.com/.

SCHEDULE
See below for detailed descriptions of all the films.

Heartbeat Detector / La Question humaine
Nicolas Klotz, France, 2007; 144m
WRT: Fri Feb 29: 3:30pm; Sun Mar 2: 8:45pm
IFC: Sat Mar 1: 3:45pm
Mathieu Amalric plays Simon Kessel, an in-house psychologist for a giant Franco-German chemical company. The upper brass, represented by Karl Rose (Jean-Pierre Kalfon), gives Simon a special assignment: to prepare an assessment of the local Parisian company manager, Mathias Jüst (Michael Lonsdale, superb), who they claim has been acting strangely. Simon attempts to establish a rapport with Jüst through his love of music, but the more he burrows into Jüst’s background, the more shocked he becomes at the company’s past, reaching back to its conduct during the war. Adapted from the novel by François Emmanuel by director Nicolas Klotz and Elisabeth Perceval, Heartbeat Detector offers a chilling look at how the structures of modern big business are often built on buried crimes.
Her Name Is Sabine / Elle s’appelle Sabine
Sandrine Bonnaire, France, 2007; 85m
WRT: Sat Mar 1: 1:30pm; Wed Mar 5: 8:45pm
IFC: Sun Mar 2: 3:30pm
Sandrine Bonnaire first burst into prominence with her heartbreaking performance in Maurice Pialat’s À nos amours. Since then, she’s worked with Agnès Varda, Jacques Rivette, Claude Chabrol and many other top-tier French directors. But throughout her acting career, Bonnaire has also been filming her younger sister, Sabine. Called crazy by her schoolmates and diagnosed as problematic by the authorities, Sabine moved in and out of schools until, in her late 20s, she was put in a mental institution. Bonnaire’s very moving, enlightening film finds Sabine at 38, living in an adult care facility after having finally been diagnosed as autistic five years earlier. An exposé of the ignorance that has plagued the treatment of autism, the film is even more centrally about the relationship between Sandrine and Sabine—the care, the closeness, the feelings of guilt and especially the frustration as one sister feels helpless to stop the other’s decline.
Let’s Dance! / Fait que ça danse!
Noémie Lvovsky, France/Switzerland, 2007; 100m
WRT: Fri Feb 29: 1:00pm; Sat Mar 1: 9:15pm
IFC: Sun Mar 2: 1:00pm
One of the finest talents of her generation, writer-director (and occasional actress) Noémie Lvovsky makes in Let’s Dance! one of the most original studies of older characters seen in years. Her new film centers around Salomon Bellinsky (Jean-Pierre Marielle), a Holocaust survivor just-more- about to turn 80. He separated from his wife Genevieve (Bulle Ogier) years ago, but the two maintain a perfectly cordial relationship—that is, until recently, when it’s become increasingly clear that Genevieve’s mind is going. Salomon knows that the end is coming, but he knows just as well that it hasn’t arrived yet—something that is especially clear once Violette (Sabine Azéma) becomes part of his life. Meanwhile, Salomon and Genevieve’s daughter, Sarah (Valeria Bruni-Tedeschi), just can’t seem to settle down, and she wonders if having a baby might help. The performances are all first-rate, and the stories of each character move seamlessly through each other, providing accents and insights to what we’ve seen.
Love Songs / Les Chansons d’amour
Christophe Honoré, France, 2007; 95m
Sun Mar 2: 1:00pm; Tue Mar 4: 1:00pm and 6:15pm
IFC: Mon Mar 3: 7:30pm
One of the most promising directorial talents in France, Christophe Honoré again defies expectations with this bold, affecting look at a group of twenty-somethings in contemporary Paris. Ismael (Louis Garrel) has slipped into a comfortable ménage à trois with his longtime girlfriend Julie (Ludivine Sagnier) and his co-worker Alice (Clotilde Hesme). After a sudden tragedy, these young people must deal not only with the reality of loss but also with the fear that love might never return. For Ismael, that process will lead him to Erwann (Grégoire Leprince-Ringuet), a college student whose affection and innocence might offer Ismael another kind of future. Buoyed by 13 songs composed by Alex Beaupain and ably performed by the cast, Love Songs powerfully captures the welter of emotions through which these characters pass, creating a decidedly contemporary update to the film musicals Honoré so clearly admires.
Paris
Cédric Klapisch, France, 2008; 130m
WRT: Sat Mar 1: 6:15pm; Tue Mar 4: 3:15pm
IFC: Sun Mar 2: 5:45pm
While waiting for a heart transplant that could save his life, Pierre (Romain Duris) has his world invaded by his sister Elise (Juliette Binoche) and her three children. The growing awareness of his impending mortality, as well as the re-discovery of his sister and her life, gives Pierre a very different sense of how he might spend the time still left to him. Meanwhile, a respected professor, Roland Verneuil (Fabrice Luchini), hopes for one more great romance in his life, while a vendor at an open-air market (Albert Dupontel), wonders what life is left for him now that he’s split from his wife—even though they continue to work together each day. A cinematic love letter to the city that seems to hide a story behind every shop window, small alley, street market or grand apartment building.

A Secret / Un secret
Claude Miller, France, 2007; 105m
WRT: Sat Mar 1: 3:45pm; Sun Mar 2: 6:00pm
IFC: Fri Feb 29: 7:30pm
As a child in the ‘50s, François could never live up to the expectations of his robust, gymnast father. Frail and sickly, he was sure that somehow he didn’t belong, that there was something amiss with his otherwise picture-perfect family. When a neighbor tells François the secret behind his family, the film transports us back to months right before the outbreak of the war. It was a moment in which France’s Jewish community was divided between those who believed that a German invasion would spell disaster and those who believed their “Frenchness” would protect them. Adapting Philippe Grimbert’s novel (soon to be published in the U.S.), Claude Miller (with Natalie Carter) employs a complex flashback structure that also features sequences set in 1985 to show how the tides of history and family memory continue to affect the present. A Secret shared the award for Best Film at the 2007 Montreal World Film Festival and was a major box-office success in France last year. With Mathieu Amalric, Ludovine Sagnier, Cécile De France, Julie Depardieu and Patrick Bruel.
Shall We Kiss? / Un baiser s’il vous plaît
Emmanuel Mouret, France, 2007; 100m
WRT: Fri Mar 7: 4:00pm; Sat Mar 8: 1:30pm; Sun Mar 9: 8:45pm
IFC: Thu Mar 6: 7:00pm
Gabriel (Michaël Cohen) and Émilie (Julie Gayet) meet on the streets of a provincial capital. He offers her a ride, and the ride turns into a pleasant dinner with clearly romantic overtones. But when Gabriel attempts to plant a good night kiss, Émilie pulls back—even one kiss, she admonishes him, can have unexpected consequences. Cut to Émilie’s friends in Paris, Judith (Virginie Ledoyen) and Nicolas (director Emmanuel Mouret), and the story of her reluctance to accept even just one kiss. Wry, observant and also quite touching, Shall We Kiss? is a very contemporary meditation on the wages of infidelity. Mouret’s intelligent, successful characters deluge their emotions and instincts with very open speculation as to why they’re doing what they’re doing, trying to appear as if they’re in control while it’s clear to everyone else they haven’t been for a while.
Those Who Remain / Ceux qui restent
Anne Le Ny, France, 2007; 94m
WRT: Thu Mar 6: 1:00pm; Sat Mar 8: 6:30pm; Sun Mar 9: 3:45pm
IFC: Sat Mar 1: 1:45pm
Every afternoon, Bertrand (Vincent Lindon), a high school German teacher, goes to visit his wife in the cancer ward of a local hospital. He meets Lorraine (Emmanuelle Devos), a graphic artist whose boyfriend is a patient on the same ward. Gradually, the two share coffees and sneak rooftop smokes. Each grows dependent on the other’s support as their lives become increasingly haunted by the specter of impending death. Veteran character actress Anne Le Ny makes an extraordinarily impressive debut as a writer-director with Those Who Remain. Her rendering of her two lead characters is fresh and supple, revealing the full range of needs each feels along with their lingering guilt just for being healthy.
Trivial / La Disparue de Deauville
Sophie Marceau, France, 2007; 103m
WRT: Thu Mar 6: 8:15pm; Fri Mar 7: 1:30pm
IFC: Wed Mar 5: 7:30pm
Since the suicide of his wife, detective Jacques Renard (Christophe Lambert) hasn’t been able to pull it together, each day seemingly as much of a drudge as the day before. When a mysterious woman advises him to check out the Hotel Riviera in Deauville, Renard discovers that the hotel’s owner, Antoine Bérangère (Robert Hossein), has been missing for two days, according to Antoine’s son and wheelchair bound second wife (Marie-Christine Barrault). A terribly disfigured corpse turns up at the local morgue, and the police and the family declare the mystery of Antoine’s disappearance solved—but Renard’s not buying it. Sophie Marceau, one of France’s most popular actresses, devises for her second film as a director an intriguing thriller filled with supernatural overtones gleaned from a century of movie mysteries. Each time the movie’s direction appears to be clear, it unexpectedly veers off into uncharted territory.
# posted by QPORIT @ 12:48 AM