On The Lot -- now widely known as OTL -- is the partnership of Steven Spielberg with Mark Burnett, the creator of so many reality shows (Survivor, The Apprentice, The Contender, The Restaurant...). The show (series premier Wednesday, May 16th on Fox) will feature 16 directors creating short film challenges in a competition to win a one million dollar development deal (and a reputation! perhaps fame! or notoriety!).

As with American Idol, America will vote on the short films created each week to determine who will stay and who will go. (A new press release, said to come from Fox/Spielberg, describes the show in more detail.)

Making a short film in a week is hard. Depending on what resources are made available (do they get a script -- or a writer -- or do they start from scratch? do they get assigned a cast -- or a pool of actors to work with -- or do they start from scratch with casting? do they bring in people they know -- or do they have to build a crew? do they get a line producer to handle the organizational details) ... and depending on what handicaps and restrictions are placed on the directors (is it a specified genre each week? does it have to be a certain length? does it have to be made on location in some foreign place? does it have to use green screen and special effects?) making a short film in a week could be anywhere from thrilling to excruciating pain.

The quality of most films is very high, but not perfect; and it's always fun to see where films work and where they don't. Anyone can visit the site and see the films; registered users can also rate and review them. Comments range from very charitable to dismissive. Films that somehow wind up on the front page of the website have gotten as many as 40,000 viewings just since Feb 16.

The site itself is very good in some ways, and needs some work in others. What's most interesting about the site is that through the message boards, blogs and reviewing each others' films, this site is developing a community of filmmakers. Technically, the streaming of films is working extremely well.

But the information architecture is a bit primitive. The site badly needs a good search engine that will identify films and find information in the blogs and boards. Adding, editing, and deleting posts, comments, and reviews is a little chancy, with things not always working as one might expect. The front page features a small set of films getting huge traffic to the near exclusion of others -- cycling pictures on the home page would benefit more films. A section of official news, or a blog by the producers would be welcomed by the whole community. (For example, the press release above-- assuming it's legitimate -- should be on the site itself, not "hidden" elsewhere.) Thumbnails for the films are taken kind of automatically -- and randomly -- from a frame of the film, and can not be changed ; it would be nice to pick the thumbnails so they promote and represent the film accurately. (Whoops -- late breaking news just announced -- some variation in the thumbnail is now possible!) The only way to check the number of viewers and the ratings for a film is to go look at it -- it's nice to have statistical information available on the filmmaker's profile, not just on the film page. All these and other related changes on the site could make OTL the most important site for user-generated serious content: YouTube is dominated by silly video clips and uploads of commercial material. OTL is all good work by new filmmakers.

Currently, the site is commercially innocent. As a business proposition, it has the potential to become the hub for a community of very active social networkers, who are voracious consumers of very expensive technology.

My own film on the site is a performance of Shakespeare's sonnet 65, with visual commentary; plus an introduction. (The thumbnail, unfortunately, is a picture of me from the introduction, instead of some great looking picture of the actress in the film.) As of right now, it's gotten two 5-star, perfect ratings, but only 46 viewings. (So the picture on the home page has been seen about 1000 times more often than mine!) 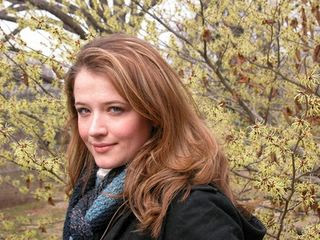 Meagan English as "My Love" in
FRAGILE (Sonnet 65) with Intro
http://films.thelot.com/films/25479